Breaking News
Home / News / Economy / Moscovici: Greece firmly stands on its own feet, can return to the markets 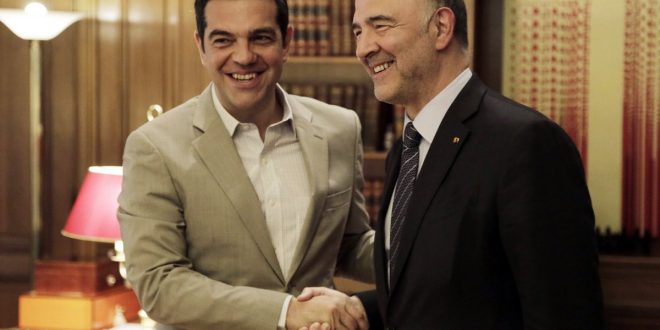 Moscovici: Greece firmly stands on its own feet, can return to the markets

July 3, 2018 Economy Comments Off on Moscovici: Greece firmly stands on its own feet, can return to the markets 218 Views

EU Commissioner for Economic and Financial Affairs, Pierre Moscovici, said that Greece firmly stands by its own feet after the Eurogroup decision on June 21 and that the post-bailout surveillance will help the country to return to the markets. During his 2-day visit in Greece, Moscovici delivered a speech at the joint meeting of the parliamentary committees on “A new chapter for Greece.”

Moscovici said among others:

Greece will be subject to the surveillance that applies to all eurozone countries, and the budget plan will be governed by the rules applicable to each country

[the Eurogorup decision ] is not a fourth memorandum, the troika will not return.

After eight difficult years Greece is back to normality, autonomy and the markets.

Greece firmly stands on its own feet as of June 21, the European Commission will again stand by Greece.

As of June 21, Greece is back on its feet and is making new steps as an integral part of the EU, and the EU will always be by your side, as we have been so far.

These eight years were incredibly difficult for the Greek people, the decisions that had to be taken by the Greek Parliament were not easy ones, let alone that no other country needed to take such measures.

“I have always opposed the excesses of austerity and those who wanted a punitive action against Greece,” the European Commissioner said and stressed that he fought for the social measures of the third adjustment programme for Greece.

“Greece has always declared its commitment to the euro area and I want to pay tribute to the courage of the Greek people and the parliament which held up the difficult and necessary initiatives,” he noted, adding that the end of the program is a victory for Greece and the eurozone.

“I believe that the time has come for Greece to demonstrate how fast it can achieve solid and strong growth, and social justice and I want to confirm once again that the European Commission will be at your side to help you as a partner and a friend in a eurozone that needs to be strengthened and united even further.”

In his speech, Moscovici congratulated Greece on meeting the deadlines and timetables, and on having implemented the latest necessary reforms.

Wrapping up his visit and the meetings he had with the President of the Republic, the Prime Minister, the Finance Minister as well as the leader of New Democracy, Moscovicei posted on his Twitter account:

As I told President #Pavlopoulos, I’m delighted to be back in Athens as #Greece looks forward to starting a new and better chapter in its long history. Greece can now stand on its own two feet again, and the @EU_Commission will always stand by its side. pic.twitter.com/tseJu4FYnY

Congratulations to @tsipras_eu and the Greek authorities for delivering on their commitments. The next chapter is for #Greece to write. The @EU_Commission will continue to support its economic development. 🇬🇷🇪🇺 pic.twitter.com/wj3G6fE8PU

PS With all these praises I hear in recent weeks I stand in temptation to believe that Greece is indeed doing economically better. If it wasn’t for the bailout dreadful “success” like the ridiculous low wages, the difficulties to find a full time job, the incredible cuts in health sector…. ops! sorry. I don’t want to complain.