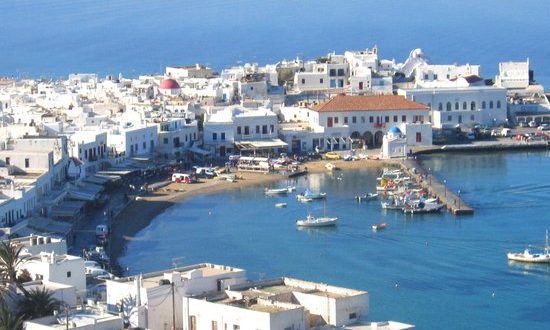 Inauguration of power supply to Mykonos with underwater cable

July 4, 2018 Economy Comments Off on Inauguration of power supply to Mykonos with underwater cable 1,686 Views

The island of Mykonos is officially connected to the power interconnection system with mainland Greece. The official inauguration of the island of Mykonos power interconnection with the Independent Power Transmission Operator (ADMIE) was held on Wednesday at the Public Power Corporation’s substation on Mykonos. Present was Energy and Environment Minister George Stathakis and other local and regional authorities.

The first phase of the power interconnection of the islands of Cyclades that includes the island of Syros connection with Lavrio and the island of Tinos as well as the connections Syros-Paros and Syros-Mykonos was concluded on May 9.

According to state news agency amna.gr, last week ADMIE announced the start of the second phase of the project with budget 70 mln euros which includes the power link between Paros and Naxos and Mykonos as well as the upgrading of the existing cable connections of Andros with south Evia and Tinos.

The second phase is expected to conclude in the second half of 2019, followed by the third phase with the submerging of a second underwater cable that will link Lavrio with the island of Syros. The fourth and final stage of the power interconnection of the islands of Cyclades has been included in the 2019-2028 ten-year development programme.

The European Commission welcomed on Wednesday the opening of the new power station in Mykonos, underlining that it represents an important step towards completing the energy interconnection of the Cyclades with mainland Greece; the integration, it said, will allow the islands to benefit from a more stable supply and more environmentally friendly energy.

The interconnection of the Cyclades with the mainland electricity network was co-funded by the 2007-2013 EU programme. The total EU contribution to the project is estimated at 176 million euros. The benefits of this interconnection will be around 80 million euros a year, which will be reflected on the bills, the Commission stressed in its anouncement.

It also pointed out that the islands will turn from electricity generation with obsolete diesel generators to electricity from natural gas, which is a more environmentally friendly source of energy. The project continues and, once completed, 13 Cycladic islands will be connected to the mainland, the Commission noted.