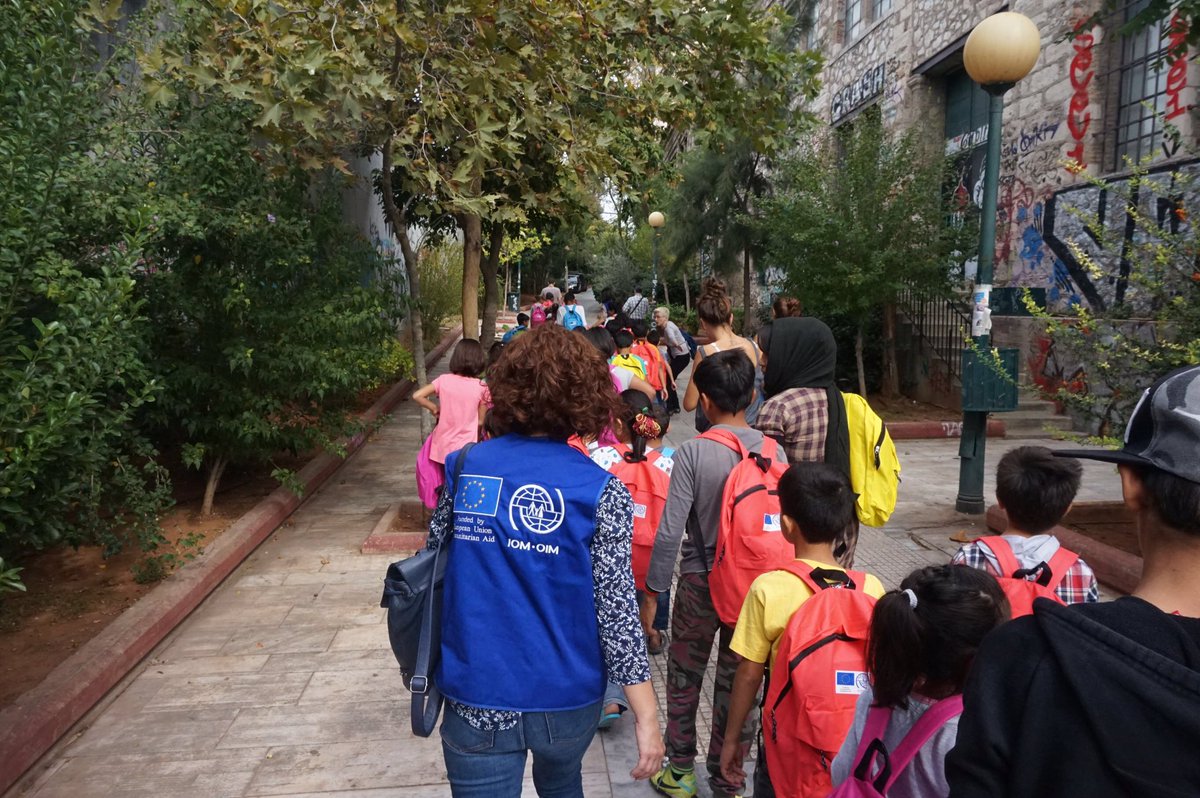 The Migration Agency of the United nations,  the European Union and Greece’s authorities helped a total of 2,800 refugee and migrant children go back to school in the year 2018.  The UN Migration Agency IOM announced on Friday that almost 2,800 children living in Greece in open-accommodation centres for migrants and refugees attended school in 2018, marking the second year when European Union (EU)-funded transportation services enabled these students to return to class.

IOM – with EU emergency support, together with the participation of the Greek Ministry of Education, Research and Religious Affairs – ensured the safe transportation of students from accommodation centres to nearby schools.

IOM Director General William Lacy Swing praised the outcome of two years of cooperation with the EU and the Government of Greece to give migrant and refugee children a chance to access and continue their education during their time in Greece. DG Swing drew attention to how this programme also has helped to ease children’s integration into Greek society. “I am pleased to see these children get back into the school system, especially after the hardships and deprivations they have endured,” Director General Swing said, adding, “Gaps in education can be devastating, not only to a child’s development, but also to society in general.”

“IOM is steadfast in its commitment to supporting the education and the integration of migrant and refugee children in Greece in every way. Education is priceless in its own right. But less talked about is its power to help the children and their families join in and build links to the local communities,” he concluded.

EU Commissioner for Humanitarian Aid and Crisis Management Christos Stylianides said: “We have a responsibility to act to prevent lost generations and avoid the risk of children growing up without education. The EU is a global leader in bringing children back to school with 8 per cent this year and 10 per cent next year of our humanitarian aid budget dedicated to education. This project is a great example of the fruitful cooperation between the Greek authorities, IOM and the EU. It brought migrant and refugee children back to school. It contributed greatly to the elimination of mental and physical barriers which hamper a child’s ability to go back to school.”

According to IOM’s latest figures, 88 school buses with 117 bus escorts carried 2,800 children from 26 accommodation centres to 123 nearby schools daily. These students also were equipped with school kits – including notebooks, pens, pencils and other necessary supplies.

The vast majority (91%) of migrant and refugee students come from one of three countries: Syria (35%), Iraq (31%) and Afghanistan (25%). These are all places where their education often was severely interrupted, or their schools bombed or destroyed.

About 1,200 students surveyed by IOM found the access and experience overwhelmingly positive.

According to the survey, 92 per cent of the children indicated their satisfaction with transportation, escorting, and safety precautions. Eighty-nine percent said they appreciated going to school, learning and interacting with other children, which are good indicators for integration into the formal education system.

“The Greek language course is my favourite, and I don’t find it difficult to learn. I have Greek friends at school. When the bell rings and we go outside for a break, we play with the ball in the school yard all together. I like going to school so much! I dream of becoming a doctor when I grow up,” said 10-year-old Younes, from Iraq. Funded by the European Commission, the project is part of the “Humanitarian and Recovery Support to the Affected Population in Greece” programme.