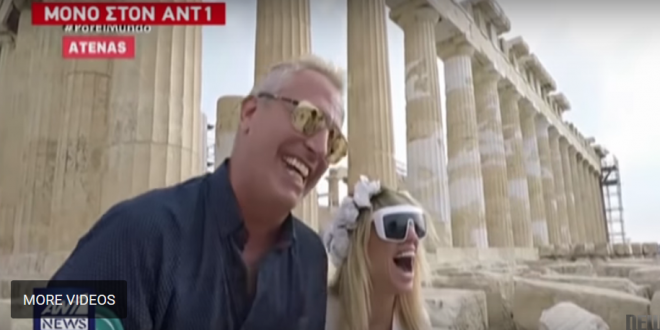 Filming silly things in Acropolis? No way, say Greek authorities. However, a television crew and two endlessly laughing presenters from Argentina managed to sneak in Athens “Sacred Rock”. Now Greeks investigate how did this happen and nobody stopped them. The production company had requested a filming permission, however, it filmed before the decision was issued. And furthermore, the decision was negative.

The presenter of  Por El Mundo program climbed on the Acropolis together with a local TV celebrity of Greek descent.

She takes of her shoe and counts her toes. “She loves Greece so much that she eats soil,” the presenter says as she gets down and kisses the ground saying “It is in my blood. I don’t know when I will come back again,” she shouts in endless laughing.

The problem is that Por El Mundo asked filming permission from Greek authorities, the Central Archaeological Council, and went filming to Acropolis before it the CAC decision  – a rejection – was issued.

The TV production company applied for filming on May 14, the CAC decision was issued on June 25.

It is not known when the filming took place but the Acropolis “Atenas” episode was broadcast on May 28.

Rejecting the filming permission, the CAC said “the examination of the file revealed that there was no guarantee that the production would correspond to the value and the seriousness of the monuments.”

According to private ANT1 TV that reported the incident on Saturday, the Ministry of Culture will investigates the issue, how and why nobody stopped the crew at the entrance.

ANT1 TV was very critical and entitled the report “Filming of Shame in the Acropolis.”

Greece has very strict regulations for filming in archaeological sites and filming in the Acropolis for professional reasons is a very rare phenomenon.