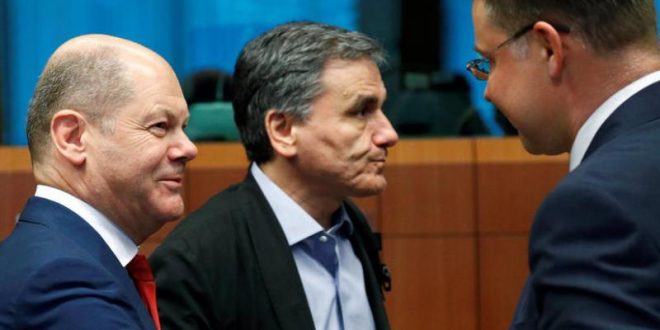 Germany expressed reservations for the disbursement of the €15 billion tranche due to Greek government’s unilateral action to postpone Value Added Tax hikes on five islands hit by the refugee crisis. Also the planned discussion about freezing of the further pension cuts was blocked by Berlin at the Eurogroup on Thursday.

The Greek government decided to postpone the V.A.T. hikes that were scheduled by creditors to be implemented on July 1. The relevant government decision was stressing that the VAT hikes postponement would be until 31. December 2018. Initially, Tsipras had announced “for as long as I am prime minister.”

Many believed the move was a product of a political deal between German Chancellor Angela Markel and Greek Prime Minister Alexix Tsipras in order to accept migrants’ returns form Germany. Later a German newspaper had claimed that Tsipras had got it wrong that Berlin had agreed to the postponement of the VAT hikes.

However, Greece did not proceed with a “unilateral action” as Germany claimed at the Eurogroup. European Commission President, Jean-Claude Juncker had given his approval.

After the Eurogroup meeting, ESM head Klaus Regling confirmed the German reservations in connection to the VAT hikes.

“It was one of the prerequisites, the amount is not big, 28 million euros and we have Greece’s commitment for six months. Today Greece committed itself to find the amount from the budget. This is an important commitment that will allow the German Parliament to approve the agreement,” Regling said.

At the press conference, Eurogroup chief Mario Centeno said that Greece will receive the last bailout tranche in August. He added that 18 countries have ratified the disbursement, while the final decision will be taken as soon as national procedures will be concluded in Germany.

“I expect this to happen beginning of August,” Centeno added.

EU Commission for Monetary Affairs, Pierre Moscovici, said there were no doubt the money will be disbursed but it will take just a little bit longer than expected.