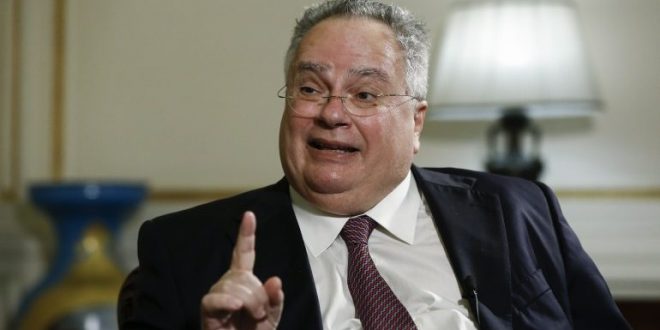 FM Kotzias: Chicken-hearted diplomacy is for the coop, not for foreign policy

July 22, 2018 Greece, Politics Comments Off on FM Kotzias: Chicken-hearted diplomacy is for the coop, not for foreign policy 230 Views

“The time when being chicken-hearted was considered diplomacy is over. This is diplomacy for the coop not for the foreign police,” Greek Foreign Minister Nikos Kotzias said in an interview on Sunday. His message was clear and was defending the latest policy of eternal ally Russia and the expulsion of two Russian diplomats Athens found they were working against the Macedonia agreement with FYROM.

“Greece has decided to send a message to the east and west, towards all our friends and not, that whoever is violating the principles national sovereignty and respect towards us, measures will be taken. The time when it was considered diplomacy to turn a blind eye has passed,” Foreign Minister Nikos Kotzias said on Sunday in an interview with the Athens-Macedonian News Agency (amna).

Asked about the tension that exists in recent days in Greek-Russian ties, and the possible cancellation of the Russian Foreign Minister’s visit to Athens, Kotzias said that he is not worried and expressed his hope that any problems will be resolved in a friendly way.

“Sergei Lavrov, whom I consider to be one of the best diplomats on the international scene, and I have a friendly relationship, asked me to invite him. To come to Greece to prepare for the trip of the Prime Minister Alexis Tsipras to Moscow, who was invited by them. I gave this invitation. If he wants to come, he will do so, again he will be welcome. If he feels that he must align with those that we expelled or with those that were not allowed to enter, it is his right. I tried, as you know, and it is highlighted in the announcement, not to link these bad cases with formal Russia. It is an issue for Russia if it wants to identify link with them or not,” he said.

The Greek minister underlined that he is not worried about Greek-Russian ties. “I am concerned about a change taking place in our country. When I ask for Turkish soldiers to leave Cyprus, they respond to me that this is not patriotic, leave some. When I ask to solve the name issue, the Skopje problem, they say to me no, not rush. When I take measures against people that violate international law and the rules of hospitality of a country, they say you shouldn’t have done this. I don’t understand why. On the one hand, some people use rhetoric of hate in the country and towards small countries such as northern Macedonia, Albania, and others and on the other hand, when large countries violate our rules, they say that we must put up with it and bow.” amna