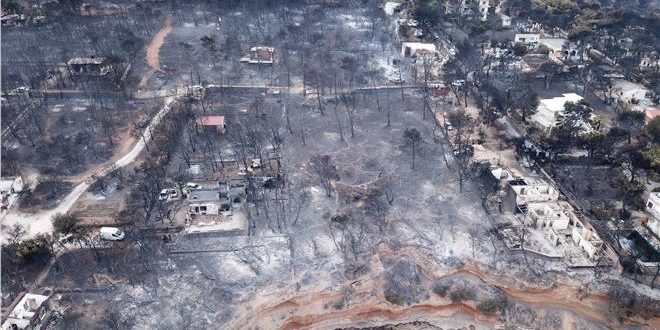 The first lawsuit by a private citizen over the devastating fire in eastern Attica on July 23 was filed with the chief prosecutor of the Athens Appeals Court Antonios Liogas on Monday, by retired navy officer Panagiotis Stamatis.

The plaintiff also asked that the plenum of appeals justices be convened so that the case can be assigned to an appeals-level magistrate.

In his lawsuit, Stamatis pressed charges against any and all persons responsible, including ministers, ministry staff, elected officials at the Attica regional authority and municipalities and others.

He asked the courts to examine whether charges can be brought against them for serious criminal actions, including murder, causing fires, reckless endangerment, violations of building regulations resulting in deaths  and dereliction of duty.

Among others, he noted that none of the officials in authority had given orders for the evacuation of the settlements of Neos Voutzas and Mati, unlike various foreign embassies that arranged for the mass sending of e-mails warning their nationals in the area, either residents or holiday makers, or the orderly evacuations to safe locations residents in the nearby military and municipal summer camps in Agios Andreas, state Athens News Agency reports.

It is not clear whether Stamatis is a resident of the area hit by the fires.

Meanwhile, the Mayor of Rafina, Vaggelis Bournous, said that he will file a lawsuit as well. Rafina is one of the areas affected by the wildfires in East Attica, just a couple kilometers east of Athens.