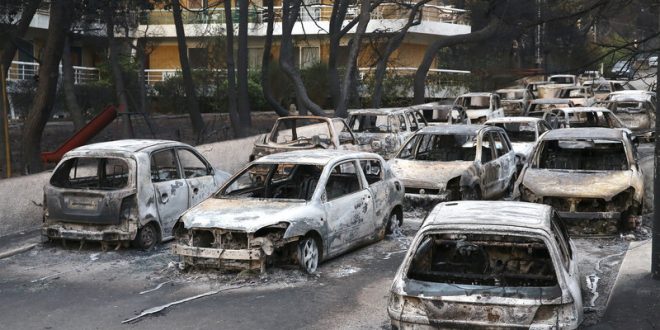 The Department of Geology and Geo-Environment and the postgraduate program “Strategies for Management of the Environment, Disasters and Crises” of the University of Athens have published a report with scientific data and preliminary conclusions regarding the fires that affected Attica on July 23rd 2018.

The data are presented in a special issue, which aims to provide immediate information to the international scientific community and the general public.

GENERAL INFORMATION
In the early afternoon of Monday, July 23, 2018 a wildfire broke out in the forest surrounding the settlement of Kallitehnoupolis on Penteli Mt., approx. 20km northeast of Athens and 5 km to the west of the Eastern Attica coastline. The cause of the wildfire remains all unknown.
Because of the extreme weather conditions, fire spread swiftly to the east, affecting, as it travelled along, the settlements of Kallitechnoulopis, Neos Voutzas, Raifna and reached Mati where it finally stopped right at the coastline.
The Fire Service was made aware of the fire ignitionon point at 16.57 (local time) and responded by sending 60 persons on 24 vehicles, 15 vehicles belonging to registered volunteers, 2 ground forces teams, as well as 3 Canadair aircraft and a helicopter.
Organized evacuation operations took place at a church charity insinstitution (Lyreion) and all children summer camps in the wider area.
The wildfire, classified as crown fire, aided by very strong winds of an approximate velocity of 90 km/h, crossed the main highway of the area (Marathonos Av.) within a very
short me (esestimated approximately 30 to 40 min depending on the location), and moved towards the settlement of Mati, where it reached the sea with a fire front of approximately 1 km, allowing for a minimal response by the inhabitants and numerous visitors of  the area.
The difficult weather conditions, the area morphology and the town configuration resulted in the entrapment of a great number of people. 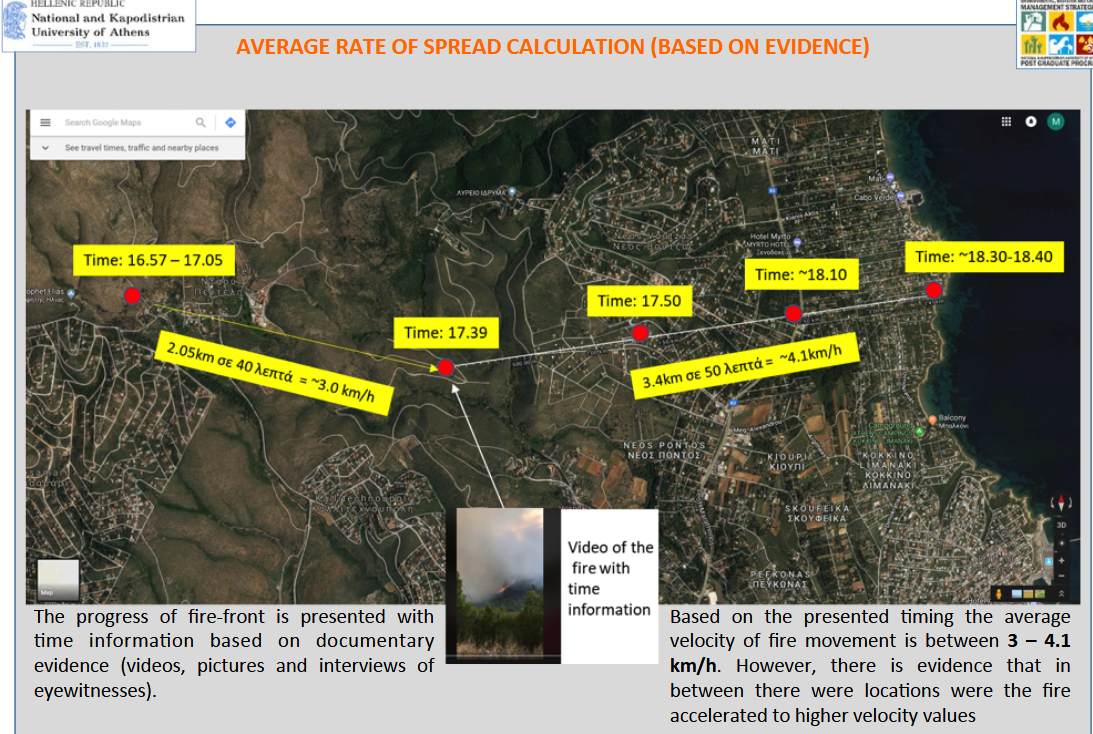 PRELIMINARY CONCLUSIONS
A summary of 15 points is given below:

1. The phenomenon is a typical fire case in a zone of  wildland urban interface, which acted as an active fire of a crown. These zones are among the areas with the highest probability of human losses worldwide, as well as in the Greek area. There are numerous cases of such bands in Greece.

2. During the fire the strong western winds, speeds at locations and intervals of more than 90 km / h (between 17.00-21.00 on 23/7/18), as well as their interaction with the topography of the area, played a very important role in the rapid transmission of the fire and its spreading to the lowest altitudes (downslope spread). 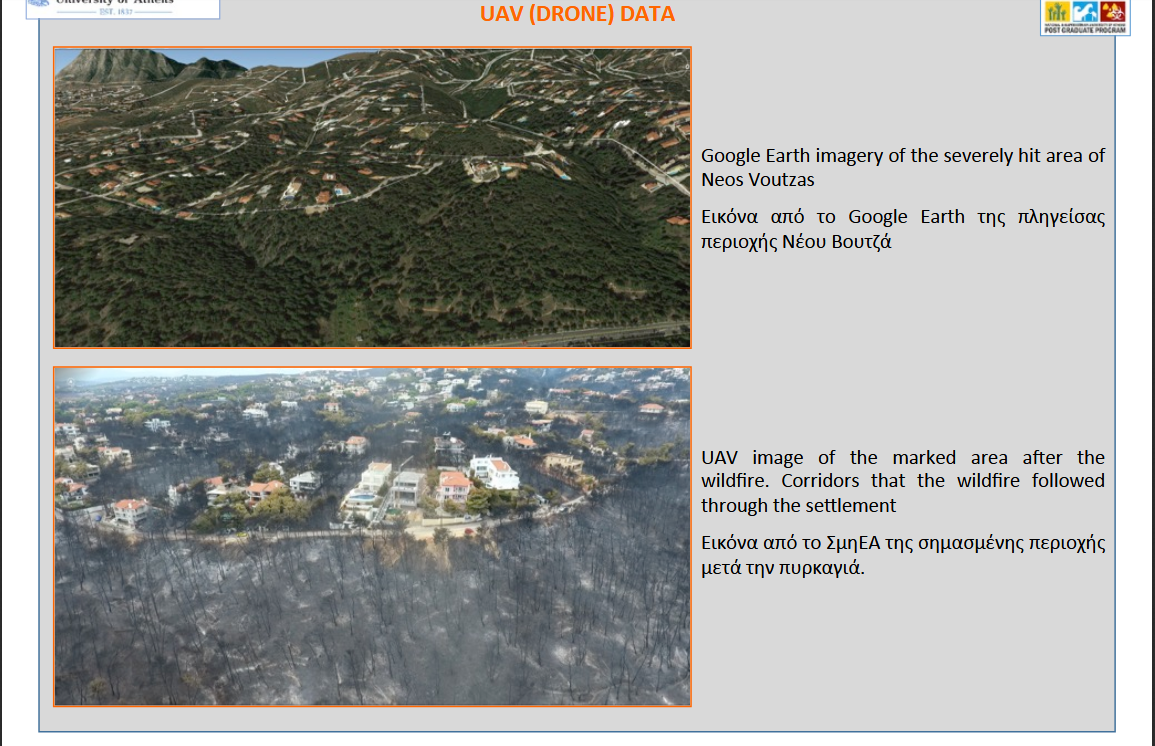 3. The rapid spread of fire contributed significantly to the minimization of reaction time available, which contributed to the large number of casualties. 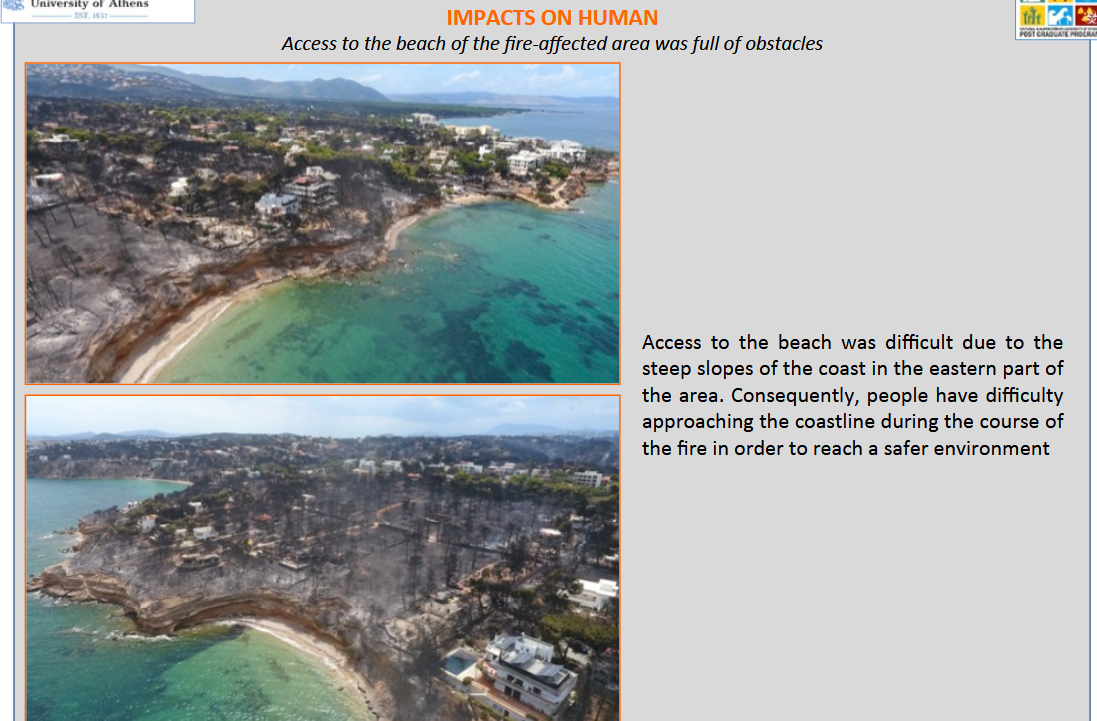 4. Based on evidence systematically analyzed, it appears that the population near the beach, at least in some locations, received information that the fire is approaching the coast, not in the form of early warning from an operator, but by people vacated the westernmost part of the Mati settlement. This indicates that the population had almost zero time between risk awareness and reaction decision. 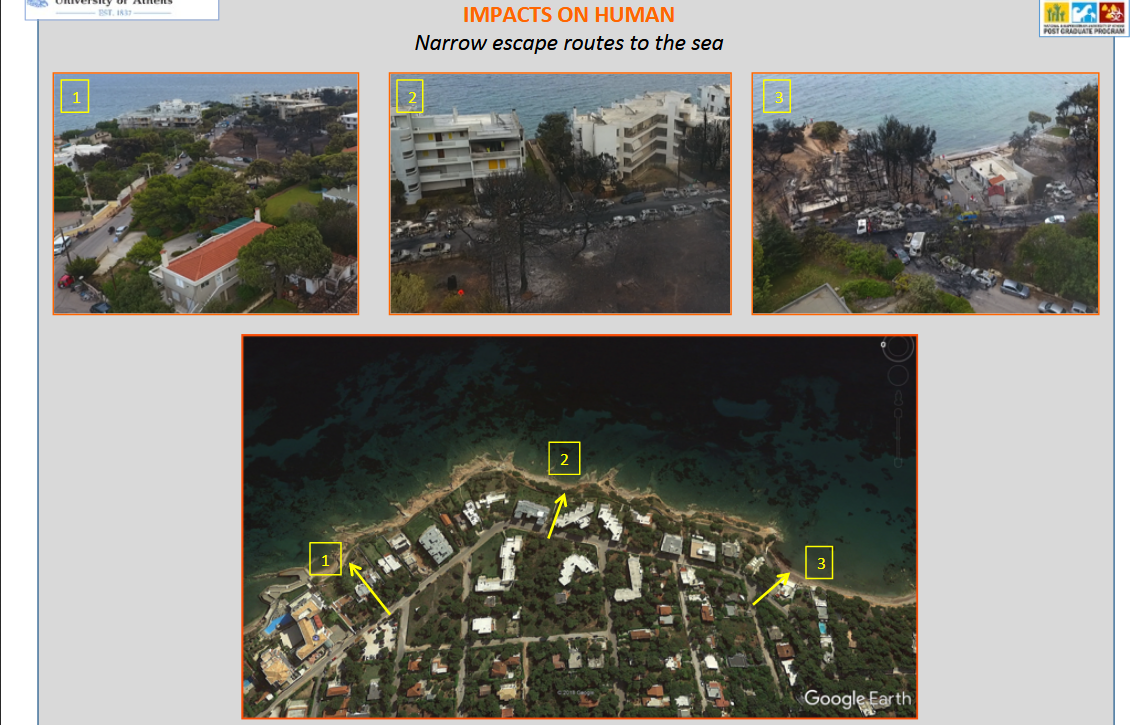 5. Importantly, it is considered to be the particular urban planning of the settlement, which acted as a “trap” for the population that tried to escape. Some of its important features were: narrow streets, numerous dead ends, particularly elongated building blocks, without the possibility of lateral escape, absence of concentration areas (eg square, stadium). The escape route role could play a road parallel to the shoreline but of great width, going to adjacent settlements. 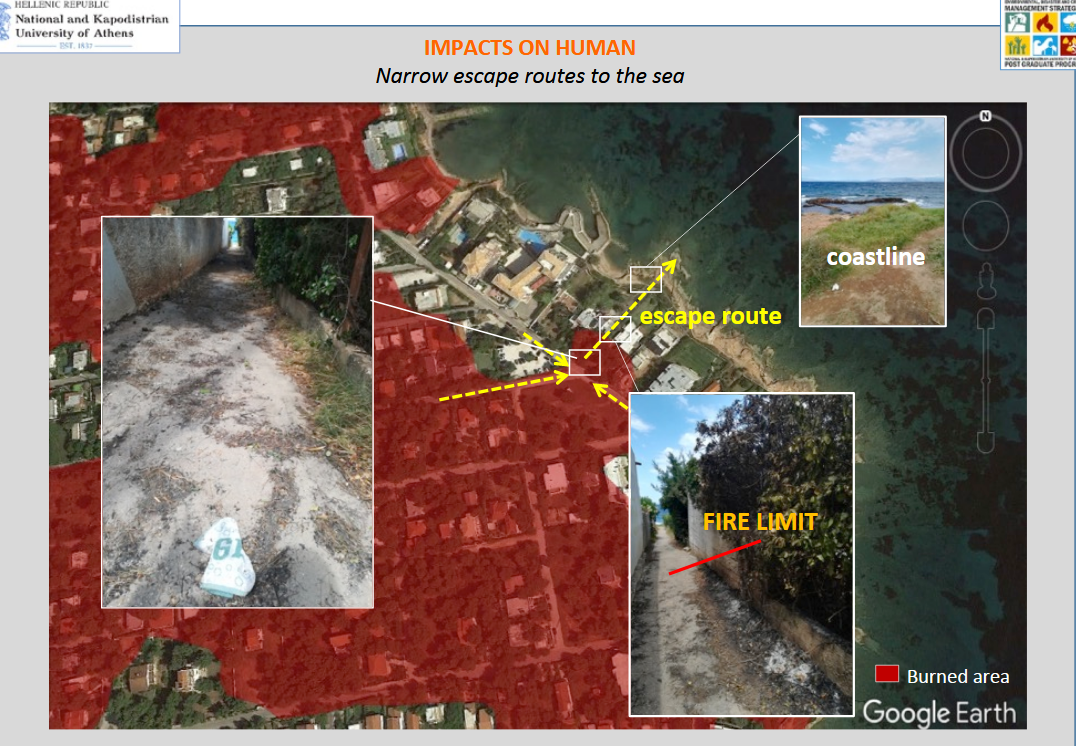 6. Field research has identified weaknesses in structures with sensitive points on the roof, frames, surrounding areas and other places. At the same time, a large number of buildings were completely destroyed.

7. As a first estimate, it was observed that mainly houses and buildings that were elevated or on floors, with less damage to the ground and underground, were typical of a crown fire. At the same time, there were significant differences between buildings in terms of impacts, which are likely to be related to construction materials and adjacent vegetation. 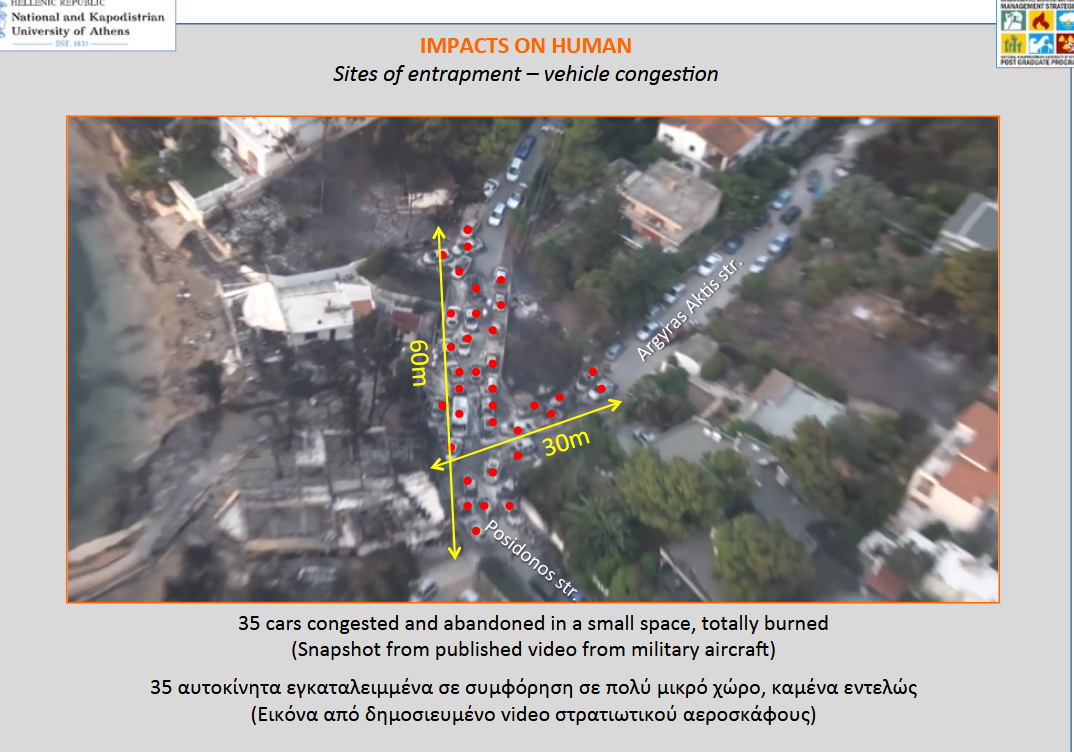 8. The first findings, based on testimonies that are still systematically analyzed, show that the attempt to escape from the settlement was disorderly, did not constitute organized removal of citizens, caused traffic congestion due to the large concentration of population and prevailing panic.  Apart from the inhabitants there were visitors / tourists, a significant percentage of whom did not know the geography of the area well.

9. The morphology of the coastline made it difficult to access the beach at most points (coastal shores), while accessible beaches were limited, which, combined with minimal visibility and muddy atmosphere, contributed significantly to the encroachment of a large number of citizens.

10. It is considered possible to change the behavior of the fire due to a change in the type of vegetation. The fire started from areas that had been burned in the past with low vegetation and high speed and went to a place that had not been burned in a recent fire with a particularly high concentration of fuel. This led to the fire supply and to the release of higher energy from Neo Voutza to the coast. The fire east of Marathon Avenue was transformed into a fire that gathered all the surface vegetation and high trees (active crown fire) as a wind-driven “wall of fire” and that in addition carried dozens of  burning flames to the coast. 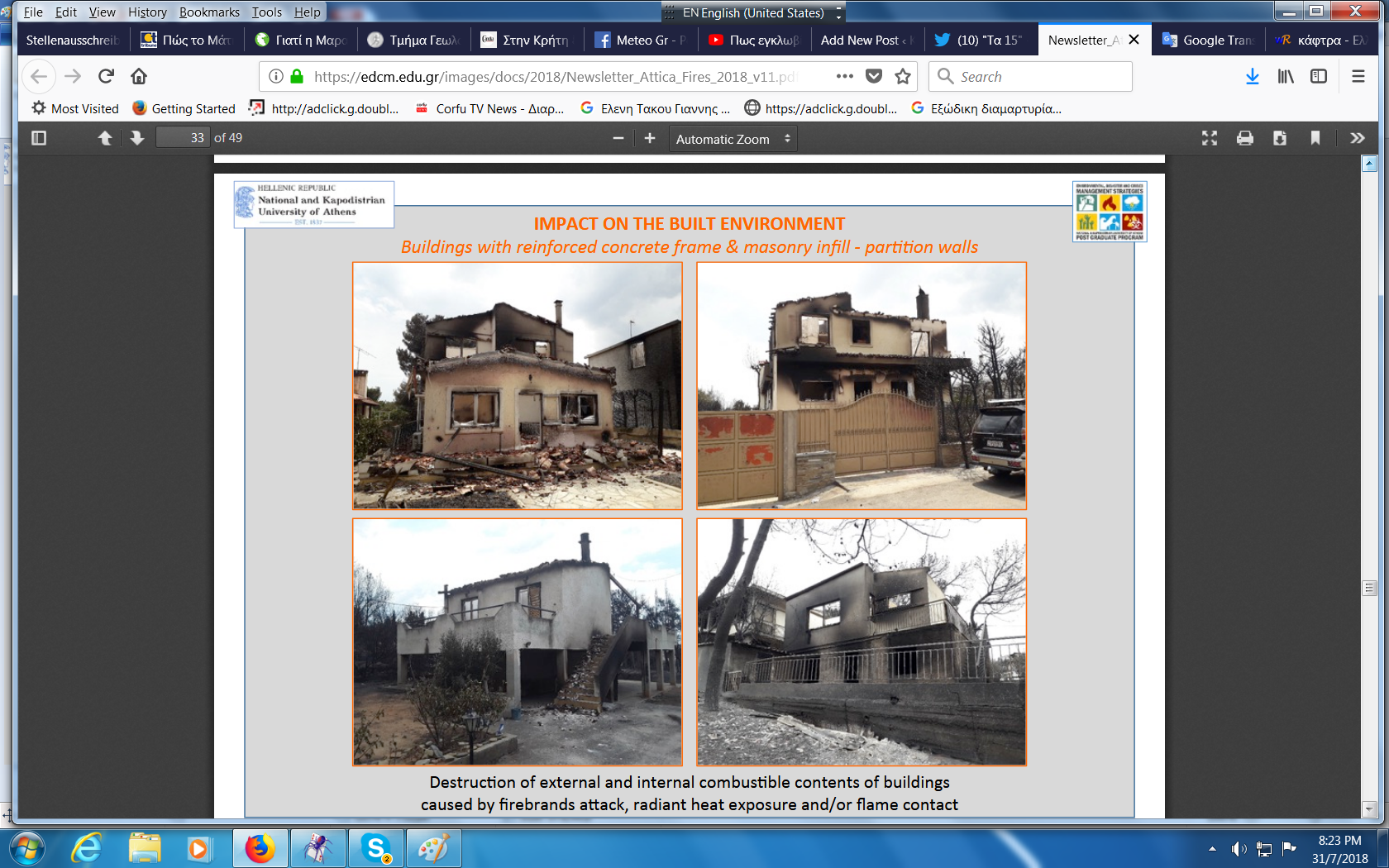 11. In buildings with a reinforced concrete load-bearing structure and filling walls having closed windows, the fire did not pass through the buildings, with the sole effect of an external epidermal deformation of the coatings, without affecting the staticity of the buildings due to its short duration of effect fire.

12. On the contrary, in similar buildings with wooden or plastic windows and open windows, the fire passed inside and its effect was greater, high temperatures developed, especially by the burning of equipment inside buildings, and cracks could occur that could affect not only non-structural elements of the structures and their load-bearing structure.

13. These cracks are unfortunately aggravated during extinguishing the fire that has been manifested in a construction as follows: Cement due to fire has developed heat. Water drops rapidly, and the carrier body drops sharply by about 50-55 degrees. Temperature drops create new cracks or extends existing ones.

14. Well-constructed reinforced concrete buildings that have come into contact with fire either by burning or by exposure to thermal radiation or by direct contact with the flames, but it did not enter the buildings, behaved very well with microbubbles on their external non-structural elements , mainly micro-cracks in the masonry filling and removal of coatings due to the high temperatures developed outside the building.

15. The staticity of the buildings affected by the fire depends on the duration of the burning on the outside of the building, whether the concrete has been calcined and to what depth or if the steel is in good condition because of the long burning time inside the house.

The full 48-page study has been compiled in collaboration with the National Observatory of Athens and in available in pdf here in Greek and several parts in English.