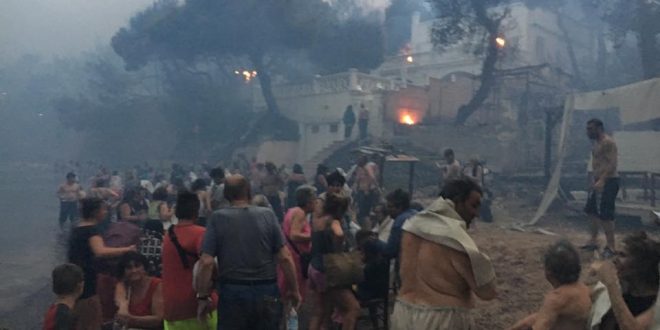 One and a half ministerial Apology for the Athens Wildfires

August 2, 2018 Greece, Politics Comments Off on One and a half ministerial Apology for the Athens Wildfires 249 Views

The first minister apology for the Athens wildfires came by the deputy defense minister on Thursday morning. Even though with a delay of eleven days. The ministers of Foreign Affairs and the deputy for Citizen Protection and Public Order followed. Almost.

Deputy Defense Minister, Fotis Kouvelis, said during a live interview with private ANT1 TV “I apologize.” However, in the same sentence he stressed that the Greek Armed Forces did what they could and even more. “There were no strategic mistakes,” he claimed.

Kouvelis said further that the fact that Prime Minister Alexis Tsipras accepted the political responsibility for the tragedy was also a form of “apology.”

A whole area in Mati was evacuated, “possibly the evacuation could have occurred without dead,” he added.

He stressed that the “factual apology from the state will be the propulsion of all these measures that will put an end a nightmare situation.”

“We apologize for the fires, we were busy with the bailout agreements,” Foreign Minister Nikos Kotzias and Deputy Minister for Citizen Protection Nikos Toskas indirectly said also on Thursday.

Kotzias and Toskas did not say it personally but in a statement issued by the political fraction “PRATTO” to which they are members.

“We ought to ask for a sincere apology from the Greek people, as during our attempts to  overcome the bailout agreements, we did not manage to change as we owed to and Greece needs to, those mentalities and perceptions that the corrupt political system of complicity and interweaving , had transformed the Greek society into a co-owner of illegality and at the same time legitimized it” the statement said among others.

The government has been target of severe criticism for not having apologized for the tragedy with 85 dead, more than 180 injured and hundreds of destroyed