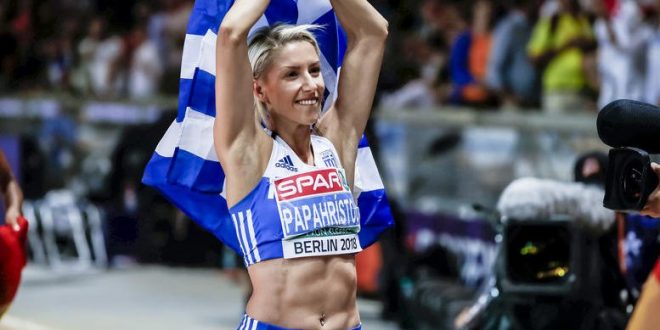 Greece's third gold medal in as many days at the European Championships!

Following on from Miltiadis Tentoglou in the long jump and Ekaterini Stefanidi in the pole vault, Paraskevi Papahristou wins the triple jump with 14.60m.#EC2018 #TheMoment pic.twitter.com/i4N4tN3fW8

Papachristou won the gold medal with her 2nd attempt.

It was the best performance in her career.

After jumping 14.60, the athlete pointed to the sky and the black ribbon she wore next to national emblem as a sign of remembrance to those who lost their lives in the deadly Athens wildfires.

“Congratulations by the Prime Minister to Papachristou is a bad choice,” Kyritsis wrote.

Papachristou was removed from the Greek team for the London Olympics 2012 by the Greek Olympic Committee after she posted a racist “joke” on her Twitter account two days before the start of the Summer Olympic Games.

Papachristou apologized saying it was a “stupid joke” but the outcry in Greece was too big.