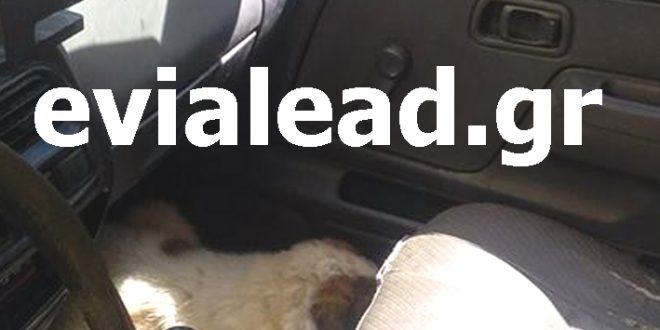 Locals in downtown Halkida were alerted to hear a dog whining and barking for help. The poor animal was left locked in a car with closed windows under the sun for several hours.

Following the dog’s whining, local spotted the animal laying down inside the car.

There was no water for the  animal and, of course, no food.

The sun was striking directly the car, the heat was unbearable.

Not knowing who is the owner, the locals called the police.

When police arrived, the owner was found sitting in a cafe opposite from where he had parked his car.

He claimed towards the police that he had left the dog in the car just for ‘a little while.’

However, locals accused him of having left the animal there for several hours, since the morning.

A veterinarian who was passing by and witnessed the incident put a bowl with fresh water for the thirsty animal, local media evialead notes.

Unfortunately there is no follow-up to the story, whether police filed a case against the dog owner for negligence and animal abuse or even if the animal was removed from the owner who certainly does not deserve to have a dog.

Most probably nothing, no fine or file happened.