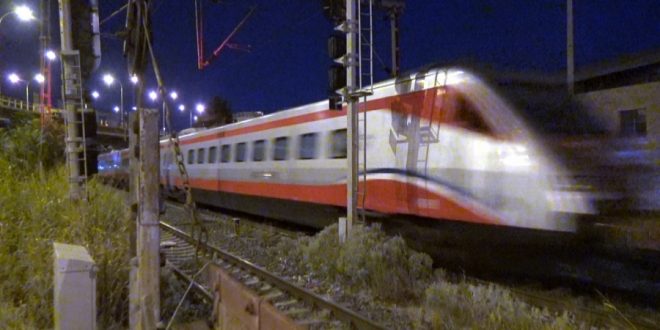 High speed train “Silver Arrow” will connect Athens – Thessaloniki in just 3.5 hours. The train arrived on Friday in Thessaloniki. However, it will still need some time to be in full operation between the Greek capital and the metropolis in the North of the country as the infrastructure has yet to be completed. The Silver Arrow was brought to Greece by the Italian company that has brought and is running the Greek Railway company TRAINOSE.

Initially, the “Silver Arrow” will be on test route between Thessaloniki and Katerini in Central and West Macedonia with a speed of 200 km per hour.

Its official inauguration is scheduled for September 8 when the International Fair of Thessaloniki starts.

When the International Fair concludes, the Silver Arrow will return to Italy until the electrification of the most difficult part of the journey, the 52-km long part between Domokos and Lianokladi is completed.

“Frecciargento FS ETR 480″ as is the full name of the train arrived in Thessaloniki from Italy via FYROM in the early morning hours of  Friday.

Electrification and test trials under supervision by European Train Control systems are expected to conclude in 2019.

The train has 480 passengers seats and can reach a speed of up to 250 km per hour and cover the route Athens-Thessaloniki in 3 hours and 20 minutes. It has A/C, bars, LCD screens for messages and entertainment programs, small tables in front of every seat.

The Silver Arrow will be competitive to airplanes, the company lets know.

After the train is in full operation, Trainose reportedly plans to bring to Greece an even quicker train the “Red Arrow.” With maximum speed at 300 km per hour, the journey Athens – Thessaloniki will be covered in less than three hours.

Italian Ferrovie bought the Greek Trainose for just  45 million euros in September 2017. The privatization of Trainose was one of the creditors’ preconditions in the terms of the third bailout agreement.

Ferrovie Dello Stato Italiane S.p.A. is the third largest railway company in Europe and has agreed to enhance and grow TrainOSE using its know-how and expertise to create a significant railway services company. According to Greek state media, Ferrovie will invest 500 million euros.