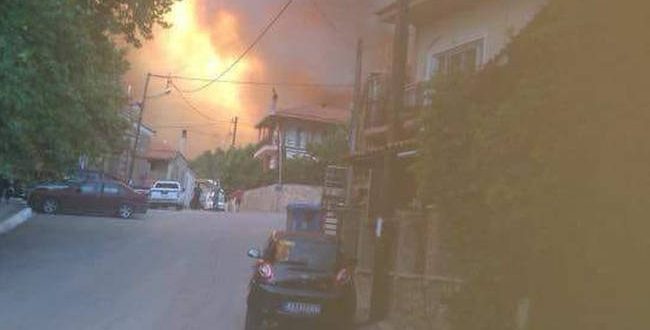 Police arrest serial arsonist for having started 9 wildfires on Evia

Police has arrested a 32-year-old Greek man, a serial arsonist as investigation proved, for having started nine wildfires on the island of Evia in the months of June, July and August.

According to a Fire Service statement, the man has been arrested following investigation by the relevant department. He has set the fires in forest areas of  the Municipality in Dirfys-Messapia.

On Saturday alone, the man started one fire at 5:20 p.m. in Stavros area and a second one in Nekrotafeio area  also in Stavros, exactly an hour later.

The fire was quickly spread due to strong winds but was taken under control after the intervention of 28 firefighters, 14 fire trucks, two helicopters and two aircraft.

The arsonist was detained early Saturday evening and he was officially arrested in the early morning hours of Sunday after being interrogated by Police and Fire Service.

He is also suspect of having set the fire in Kontodespoti on 12. August that burned down 8,000 acres and had two villages and one monastery evacuated.

In June the serial arsonist started five fires, in July one and in August three.

Alone in Stavros area he had started six fires.

He was taken to prosecutor in Halkida Sunday noon.

According to latest information the man confessed the arson claiming he started the fires as retaliation to his fellow villagers who were making fun of him.