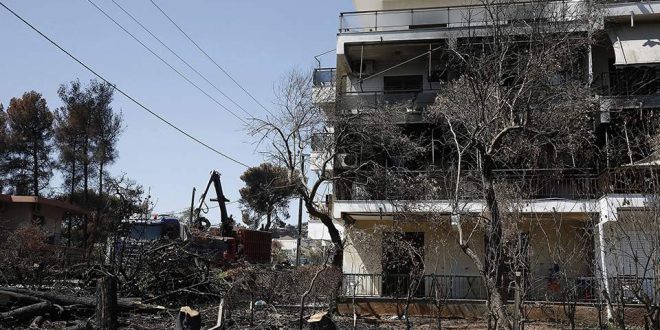 August 27, 2018 Social Comments Off on Death toll in Athens wildfires rises to 97 after another victim dies in hospital 328 Views

Death toll from Athens wildfires rose to 97 after another injured died in the hospital on Monday morning. The number of people who died in the hospitals is 14, the Fire Service said in a statement adding that the identified dead in the fire areas were 83.

According to media information, the latest victim was a 76-year-old man hospitalized with severe burn injuries in Thriasio hospital since 23. July.

Meanwhile, the two bodies that remained unidentified for several weeks were identified.

One of the bodies was finally sought by relatives and the identification occurred after a DNA test.

The previous statement about the death toll was issued on August 14.

According to state broadcaster ERT, a total of 25 people remain hospitalized five weeks after the deadly fires. Four people are still Intensive Care Units, two of them are intubated.

A 6-year-old boy is also still in hospital.

Prosecutors continue investigation about possible mistakes and omissions and wrong decision on the part of state bodies that might have led to the unprecedented tragedy just 30 km away from the Greek capital Athens.

Victims relatives but also fire survivors have filed lawsuits against everyone responsible.