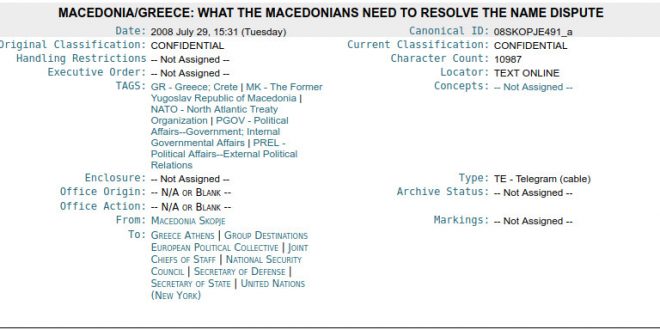 For 10 years, the Former Yugoslav Republic of Macedonia was struggling to get the name “North Macedonia” but also to reach an agreement with Greece that would grant them Macedonian language and identity. This is understood from a confidential document published by Wikileaks. The document has apparently compiled by then US ambassador to Skopje Gillian Milovanovic..

The document raises several questions and has now many Greeks wonder

The document is reportedly a cable by the then US Ambassador to FYROM Gillian Milovanovic and it is dated 29. July 2008.

In the cable to US State Department, Milovanovic reports about the aspirations of FYROM leadership, Prime Minister Nikola Gruevski and President Brank Crvenkovski.

The report has the title

Macedonia/Greece: What the Macedonians need to resolve the name dispute 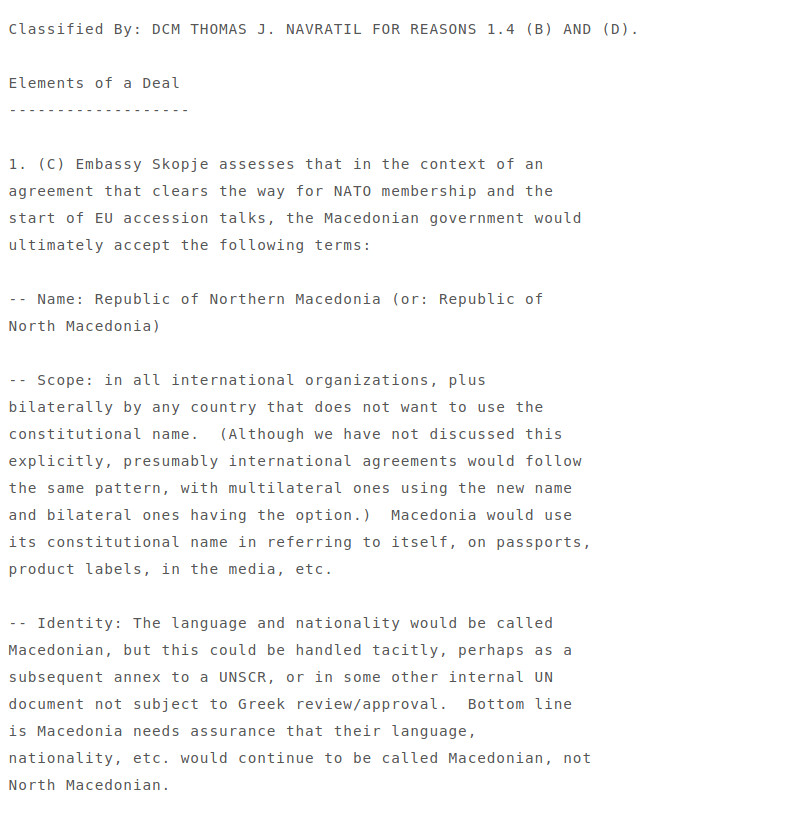 Although Prime Minister Zoran Zaev has claimed that the Prespes/Macedonia agreement with Greece has cost him a lot of concession, the cable hows that he received exactly what were the goals of FYROM under Gruevski ten years go. There has been no immediate reaction by Zaev.

On its part, the Greek side said, that the document refers to Gruevski’s positions for a model of a double name. “We achieved a solution for a compound name erga omnes [for all puposes] both on bilateral and multilateral  level,” a Greek government official told media.

Foreign Minister Nikos Kotzias gave his own interpretation saying that “Gruevski was pretending to accept a compromise.”

Prompt was the reaction by main opposition leader Kyriakos Mitsotakis from conservative New Democracy. He reiterated his pledge never to ratify the Athens-Skopje name deal, after a Wikileaks cable showing FYROM wanted the name ‘North Macedonia’ since 2008. “Wikileaks tragically confirm me, the Macedonia Agremeent is harmful,” he said.

Meanhwile the Wikileaks document has been uploaded by all Greek mainstream and online media and is stirring the political scene.