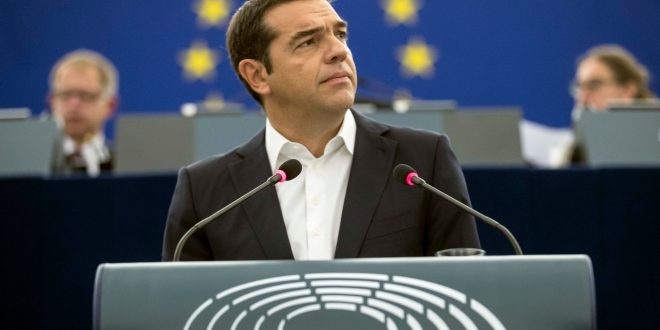 Tsipras warns “Europe has no future, if it doesn’t admit mistakes”

September 12, 2018 Greece, Politics Comments Off on Tsipras warns “Europe has no future, if it doesn’t admit mistakes” 454 Views

Europe will have no future if the bloc does not admit mistakes in handling the financial and the migration crisis, Prime Minister warned the European Parliament on Tuesday. Alexis Tsipras said Europe could face an existential crisis over nationalism unless the bloc admits mistakes and its failure to handle a fiscal crisis and the deal with an influx of migrants effectively.

The Greek Prime Minister said economic austerity pushed by European governments has fostered fear, racism and the emergence of the far right.

“The EU’s failure to give democratic and effective responses to modern challenges will lead irrevocably to the triumph of chauvinism and will rekindle nationalistic rivalry, ” he said.

The economic austerity pursued by European governments had fostered fear, racism and the emergence of the far right, he told lawmakers in the European parliament.

“The EU’s failure to give democratic and effective responses to modern challenges will lead irrevocably to the triumph of chauvinism and will rekindle nationalistic rivalry,” he said.

“It will turn it into a fragmented continent, a continent without cohesion, without an international role, and without a future,” he said.

Tsipras also criticised Europe’s handling of security and said this could have helped bolster support for far right parties. Several European countries including France and Belgium have seen attacks by Islamist militants in recent years.

“The issue at stake is existential for Europe,” said Tsipras. “The handling so far of the financial crisis, the refugee crisis and a security crisis, has exposed huge deficiencies and contradictions.”

“When other countries were unilaterally violating European decisions and raising fences, crisis-hit Greece resisted the sirens of hatred,” he said from Strasbourg.

Greece’s economic woes are part of a sovereign debt crisis that hit Europe starting in 2009 and also affected Portugal, Ireland, Spain and Cyprus.

Tsipras’s comments came a day after regional authorities threatened to ban the operation of the country’s biggest migrant camp next month unless authorities cleaned up “uncontrollable amounts of waste”.