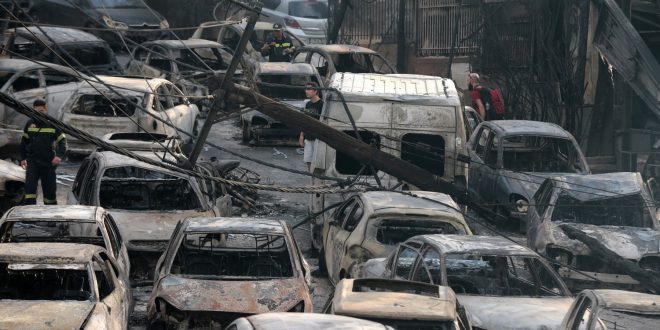 A scandal about possible delays and freezing of the investigation about the wildfires in Athens where 99 people lost their lives was narrowly avoided on Tuesday.

The prosecutor of Greece’s top court Areios Pagos had to cancel her decision to “freeze” the ongoing investigation conducted by the head of the Athens Prosecutor’s office until the report by the General Inspector of the Public Administration on the issue was completed.

Head of Athens prosecutor Ilias Zagoraios has received a report on Monday and would soon start to directly link responsibilities with specific individuals and officers and proceed with  summoning officials to give testimony.

The Public Administration is conducting an internal investigation into possible responsibilities of all those bodies involves like the Fire Service, the Coast Guard, and others.

The decision to freeze Zagoraios’ investigation triggered an outrage and drew sharp criticism from opposition parties.

The issue was solved when  Supreme Court prosecutor Xeni Dimitriou revoked her decision and advised the head of Athens’ Prosecutors office Ilias Zagoraios to continue investigation without waiting for the other report and keep up with his plans to summon officials to give testimony.

“Sources from the prosecutor’s office clarified that Dimitriou’s request was not intended to freeze the ongoing investigation into the deaths of 99 people,” kathimerini notes.

Furthermore, with Dimitriou’s decision Zagoraios he will remain in place until the investigation is completed, although he will be no longer head the prosecutor’s office as his tenure is ending this month and his successor has already been elected.

From what I hear and I write it with with some reservation, Dimitriou’s decision was aiming to avoid that one procedure would block the other one in terms of internal investigations and responsibilities.

According to athens news agency, the 100-page report handed over to prosecutor Zagoraios on Monday describes the situation that led to the deaths of  the 99 people with the prosecutor to be ready to directly link responsibilities with specific individuals and officers.

Investigation for the 100-page report was conducted by an independent expert in the name of the Greek state.

Newspaper To Ethnos has obtain the report and reveals that the findings “set the Fire Service on fire”.

The report allegedly mentions “omissions on the side of those responsible for the crisis management, delays in taking initiatives, inaccuracies with regards to evacuation orders of Neos Voutzas and Mati as well as  the firefighters’ mobilization.