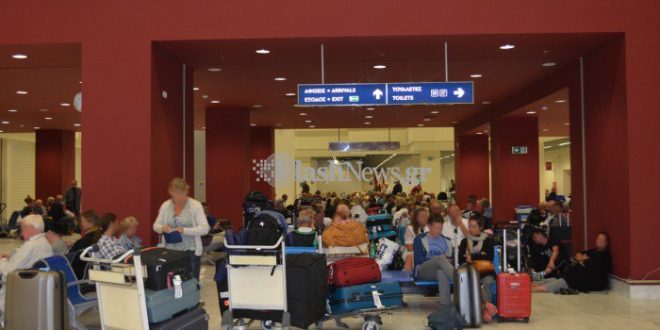 Budget airline Primera Air ceased operation over night leaving thousands of stranded holiday makers in twenty countries around the globe. Four hundred tourists have stranded at the airport of Chania on the island of Crete, local media report.

Nordic budget airline Primera Air has become the latest European carrier to go bust, telling staff that all flights were being halted.

“On this sad day we are saying Goodbye to all of you,” Primera Air said in a statement on its website on Tuesday.

Primera Air, which is Icelandic owned but based in Copenhagen, began in 2003 and has served 97 destinations in more than 20 countries.

On Monday night, the three flights from Chania were suddenly cancelled and hundredts of tourists stranded at the airport not knowing what to do and without any further information from the airliner.

Primera Air schedules were two flights from Chania on Mondays and Fridays.

A holiday makers from Denmark told local media flashnews, that they had come to the airport to fly back home when they learned by other passengers that the company had collapsed.

400 Primera passenger are estimated to be stranded in Chania since Monday. Several hundreds are also those scheduled to fly back on upcoming Friday and next week.

It is worth noting that while the bankruptcy was announced, another 400 passengers were flying to the airport of Chania, writes zarpanews.

Accoridng to the local websites, next to Crete  Primera Air was flying also to other Greek destinations including Rhodes,Zakynthos, Kos, Peloponnese and Athens.

According to Reuters, Primera Air announced last month that it planned to launch routes from Madrid to New York, Boston and Toronto next year at an introductory price of 149 euros ($172) each way.

It also announced in September plans for direct long-haul flights from Frankfurt to New York, Boston, Toronto and Montreal from next year.

Primera was forced to cancel flights earlier this year, citing delays in receiving aircraft from Airbus, but has faced growing complaints about poor service and late refunds.