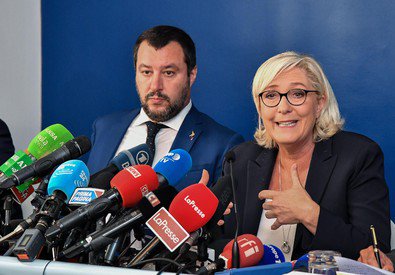 Populist Alliance has EU leadership paralyzed in its Brussels bubble

Italy’s far-right Deputy Prime Minister Matteo Salvini and French populist Marie LePen met in Rome on Monday to seal a unholy alliance: they declared that they are the anti-establishment movement within the European Union.

Salvini slammed the European Union for budget restrictions and austerity, the migration crisis as well as the youth unemployment across the member states. He described European Commission President Jean-Claude, the Brussels bureaucracy and EU’s  Commissioner for Financial Affairs Pierre as “enemies of Europe.”

It was the latest attack of the Italian administration against Brussels that brings bonds and stocks to tumble and literally shocks top heads of the EU and the Eurozone who can hardly cope with the issue. It’s the “enemy from within” that has Brussels paralyzed.

“We are against the enemies of Europe — Juncker and Moscovici — shut away in the Brussels bunker,” Salvini said. “The politics of austerity of the last few years has increased Italian debt and impoverished Italy.”

The statement was made during a joint press conference with LePen who visited Rome on Monday.

A day earlier, Salvini who is also Interior Ministry threatened to shut the country’s airports after media reported that Germany planned to send charter flights of rejected asylum-seekers to Italy.

“If someone in Berlin or Brussels thinks of dropping dozens of migrants via non-authorized charter flights in Italy, they should know that there is not and there will be no airport available,” Salvini said on Twitter.

“We will close the airports like we closed our ports,” he added in reference to Italy’s decision this summer to ban migrant rescue boats from entering its harbors.

His comments came after German news agency DPA reported Sunday that Berlin intended to start returning rejected asylum-seekers to Italy via chartered flights. The first flight was due to leave Monday, with another scheduled for October 17, according to DPA. The migrants were mainly Nigerians who had entered the European Union via Italy, the agency said.

A few days earlier, Salvini contemptuously refereed to Juncker and his alleged drinking  saying he was ignoring him because “I talk to sober people”.

Too polite to cope with a disrespectful Trump-style rhetoric, the EC said in a statement the following day saying it had “always respected” Italy.

The populists setting the agenda in Italy are training their attacks on the European establishment as they prepare for the next battle over the 2019 budget. Salvini and his ally Luigi Di Maio are targeting next May’s EU elections as a chance to roll back the budget rules that have cramped their style since taking office, notes bloomberg.

The government has to send a draft budget to Brussels by Oct. 15 and EU officials have signaled that Italy’s plans for a deficit of 2.4 percent of GDP next year will put them in breach of EU rules.

The Italian government plans to cut taxes and ramp up benefit spending puts them on course for a collision with the EU budget police and the investors they need to finance their plans.

Investors show growing concern over the Rome – Brussels spat even if the Italian government claims it does not plan to leave neither the Eurozone nor the European Union.

Bonds and stocks tumble also on Monday and yield on 10-year Italian government bonds hit record, the highest level in over fiver years with 3.58%.

“Italian government bonds are increasingly seen as riskier investments given the anti-establishment Cabinet and its public spending plans — so much so, that Italian bonds are moving closer to being seen to be as risky as Greece’s,” notes cnbc.

A new euro crisis is feared, and economically weak Greece already suffers from the Italian “virus.”

“We are in a risk-off environment as long as bonds remain under the hammer. This hits bank shares across the European south,” said  Greek bank treasurer told reuters. “We have been affected by the Italian virus.”

But Italy is not Greece. Not only is Italy one of the co-founders of the eurozone and the European Union, it has also a trillion-euros debt that no European or International Fund could rescue and bailout.

“The fiscal targets announced by the new [Italian] government that came into office a few months ago are out of line with the agreed fiscal framework that euro-area countries have given themselves unanimously,” head of the European Stability Mechanism Klaus Regling told Bloomberg TV.

If the European Union sticks to the German fiscal policies and does not recognize the real problem starting with self-criticism, its leaders will keep sitting in their Brussels bubble contemplating on how could this happen, that Europe turned far-right?

Or just dancing around….

Is this @JunckerEU mocking @theresa_may 's Abba dance at a speech to the Committee of the Regions?

The post national-socialism has just turned around the corner not only in Italy and France but also in Germany with the AfD and other far-right groups and Austria with Kurz and Hungary with Orban.

Populists do know how to manipulate people and turn their anger and frustration to scapegoats.

PS trust me: if the EU keep contemplating it will never find the answer.

The helicopter carrying Deputy Defense Minister, Nikos Hardalias, to the island of Agios Efstratios was …