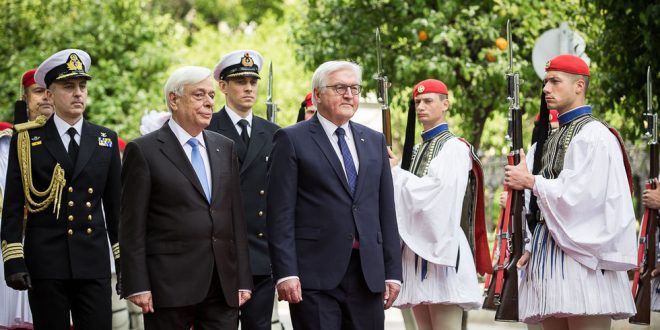 October 11, 2018 Greece, Politics Comments Off on Steinmeier in Athens to hear about War Reparations even if Berlin rejects claims 1,022 Views

German President Frank-Walter Steinmeier arrived in Athens on Wednesday with his luggage full of  nicely ironed and folded “Neins.” Steinmeier is considered to be a friend of Greece but when it comes to WWII reparations by the Nazis Berlin has a clear and steady position.

Hours before the German president boarded on the plane to the Greek capital, government spokesman Steffen Seibert  told reporters in Berlin that the issue of war reparations has been settled “legally and politically.”

“The reparations issue has been settled legally and politically, and nothing has changed on this matter,” Seibert said.

He added that the Greek government has not made any official move on that issue.

Of course, it hasn’t. Not yet. Had Seibert read KTG he would have known that the Greek government will bring the  report of the Special Committee to the Parliament plenary for voting by the end of 2018.

Speaking to the state broadcaster ERT, Parliament Speaker Nikos Voutsis said mid-September underlined that “the report on the special committee established to examine the issue of the German war reparations will come to Parliament and will be taken into account. There will be a demand at a transnational and legal level.”

When ready, Greece is reportedly to seek a legal body to take Germany to court and claim the reparations.

Voutsis explained that Greece did not want to give the impression during the discussions on the Greek bailouts that ‘we may offset this sacred issue in the memory of the Greek people with possible financial or material demands of these programs.”

The War Reparations issue is “a decades-long demand,” Voutsis added.

After months, of silence both the Greek President Prokopis Pavlopoulos and Prime Minister Alexis Tsipras started to speak again about the issue in early autumn.

Greece brought up the claims on German War Reparations in 2012 by the ND/PASOK coalition as the country was struggling with the economic crisis and creditors led by Berlin was asking water and heaven. Alexis Tsipras and SYRIZA/ANEL government reiterated the claims after it came to power in 2015, the issue continued until 2017.

Berlin has repeatedly turned down the Greek claims even though they were not officially demanded so far.

In 2014, Germany urged debt-ridden Greece to “forget about War Reparations and look towards a united Europe.”

The WWII reparations for the forced loan the Nazis took from the Bank of Greece, the looting of the country’s assets and treasuries as well as for the atrocities committed during the 1941-1944 time are estimated to be €289 billion.

German researchers have found that Berlin owes Athens €185 billion and that not even 1% has been paid to Greece.

Germany claims the issue was settled with the 1960 Agreement.

There is no doubt that especially President Pavlopoulos will talk about the issue to his German counterpart Steienmeier.