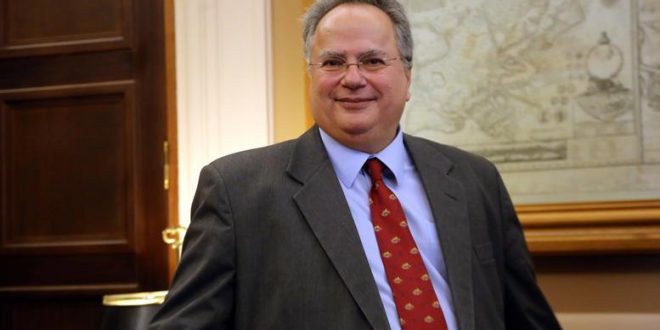 Greek Foreign Minister Nikos Kotzias resigned early afternoon Wednesday after a cabinet meeting the previous day where he clashed with Defense Minister and junior coalition partner Panos Kammenos over the Prespes Agreement and as it seems also other issues.

Nikos Kotzias considered that the Prime Minister and other cabinet ministers did not support him when reportedly Kammenos accused him of alleged “mismanagement of secret funds in the foreign ministry.”

“PM and several ministers made their choices and so did I,” Kotzias tweeted among others.

The Prime Minister’s office issued a short statement in which it announces that Tsipras will take over the role of Foreign Minister.

Relations between Kotzias and Kammenos have been tense lately after the Defense Minister proposed to US an alternative plan to Prespes Agreement without previous coordination with the Prime Minister how much more with the Foreign Ministry.

Kotzias is the minister who mainly worked out the Agreement with FYROM to solve the 26-year-old Macedonia name dispute.

At the cabinet meeting on Tuesday, Kammenos reiterated his disagreement with the Prespes Deal.

The Foreign Minister accused his colleague of “policies that harm the government and the country to serve his own political and personal aspirations.”

However, the Prespes Agreement was only one part of the disagreement between Kotzias and Kammenos.

The now ex Foreign Minister had initiated a legislation with regards to the “secret funds”  the ministries have available to distribute without control and transparency. Since 2017, the Greek Foreign Ministry is the only ministry that submits the distribution of secret funds to the Palriament.

At the cabinet meeting, he proposed Tsipras a new legislation for the funds of the Defense Ministry as well as of other ministries.

It should be reminded that the first thing Kotzias did when he became Foreign Minister in 2015, was to initiate a thorough investigation into funds worth millions of euros distributed by the ministry to NGOs, many of them proved to have zero activity over the years.

Kotzias had reportedly decided to resign right after the cabinet meeting in order to protect his dignity after Tsipras put him on the same level with Kammenos.”

Later he met with the President of the Republic Prokopis Pavlopoulos.

According to media, he had submitted his resignation verbal on Tuesday night.

While media wrote that he was about to resign, government spokesman Dimitris Tzanakopoulos told reporters “the government train moves on, has a clear direction and destination, whoever  does not want to reach the end station or is unhappy can get off.”

That was the green light for Kotzias that he had no longer the support he needed and submitted his resignation in written form at 2 p.m. on Wednesday. It was accepted immediately.

Assuming the office of the Foreign Minister “marks the determination to do everything possible to guarantee the successful completion of the historic Prespes Agreement,” Tsipras said after a cabinet meeting following Kotzias’ resignation.

He stressed  that he accepted Kotzias’ resignation “with a heavy heart,” and thanked him for his contribution these past 3.5 years in raising Greece’s profile in the region.

In addition, Tsipras warned that he will “not accept any double messages from now on from anyone, no personal opinion relating to the country’s national policy, expressed consciously or not, that disrupts the country’s smooth path.”

The Prime Minister is determined to conclude the four-year term of the SYRIZA-ANEL government is power and in this sense he asked ANEL ministers to commit themselves to not bring down the government over the Macedonia issue.

And here is another Greek paradox: Tsipras sacrifices the initiator of Prespes Agreement for the sake of Agreement’s opponent.

Apparently the opponent has more power in keeping the government in power for a couple of months, then once the Agreement comes to Parliament for ratification ANEL will not vote in favor.

Kotzias is an elected member of the Parliament and so far there has been no information or rumor that he might resign also from his Palriament seat.

Worth noting, that several high-ranking SYRIZA officers went against Kammenos at the  Central Committee Convention of the party last week.