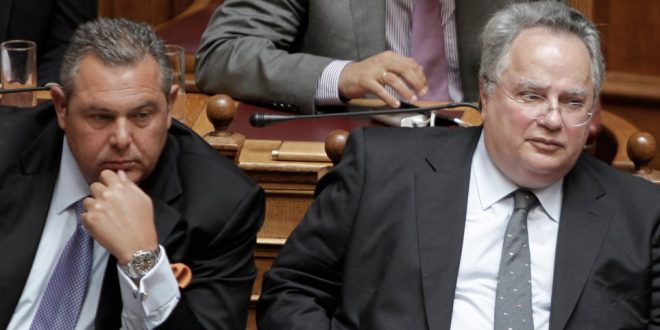 Kammenos, Kotzias and the “€50mn by George Soros for Prespes Agreement”

Defense Minister Panos Kammenos fired unbelievable allegations against now former Foreign Minister Nikos Kotzias and practically forced him to resignation after the Prime Minister and other first-class ministers failed to support him.

Tsipras’ junior coalition partner Kammenos alleged Kotzias mismanaged funds for the Prespses Agreement, he was involved in issuing of illegal visas… with the peak to be that Kotzias received 50,000,000 euros by George Soros in order to proceed with the deal with FYROM.

According to in.gr news, Kammenos initially accused Kotzias of  having given “19 million euros to foreign media to swear at him to his position Prespes position.”

Eleftheros Typos daily reported that Kammenos accused Kotzias of “mismanaging 45 million euros in secret funds,’ Kotzias responded that the amount is “11 million and that 50% of it is given to the Church directly paid by the Finance Ministry.”

Kammenos’s allegation were verbal and at no time provided evidence to support his claims. What is extremely odd for a cabinet and such heavy claims is that the Defense Minister was not even asked to to provide evidence.

For Kammenos who loves conspiracy theories, George Soros is the enemy he loves to hate. He always uses “Soros involvement” when it uses when it comes to the Prespes Agreement.

In a recent interview with state broadcaster ERT TV,  Kammenos said that “Soros has distributed billions from Australia to USA and the Balkans” in order to support the deal between Greece and FYROM.

Billionaire George Soros seems to be Kammenos’ favorite scapegoat. He even saw Soros  behind reports that the European Anti-Fraud Agency OLAF was investigating the Defense Ministry over mismanagement of EU Funds for the Migration crisis.

On Tuesday, the Defense Minister made his allegations against Kotzias in front of Prime Minister Alexis Tsipras.

These allegations raise a lot of question and urge for further investigation if Greece want to be   run by a serious government.

Otherwise, it is just the famous “fan…” oh wait! On Thursday, without exceptions opposition parties demand further explanations on the issue demanding confirmation of the allegations.

The Movement of Change (PASOK) to asks the Prime Minister to confirm or dismiss whether the leaked allegations were indeed made, others ask Tsipras to explain why he did not intervene and the Centrists’ Union asked for the prosecutor to intervene.

So far, the Prime Ministers’ office had nothing more to say other than issuing a short statement addressing main opposition New Democracy and asking “where did the secret funds go when Dora Bakoyiannis was Foreign Minister.”

PS this looks like another political crisis the government will proven unable to deal with at communications level.