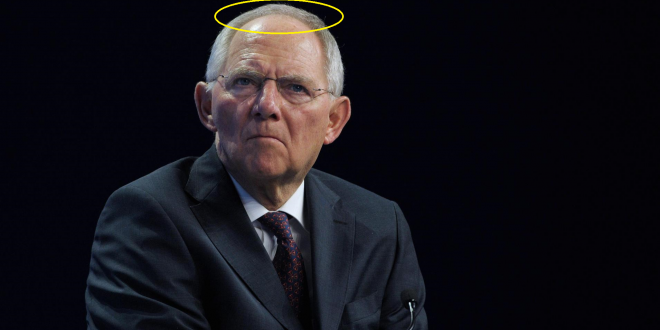 Wolfgang Schaeuble has turned down criticism of being “too harsh on Greece” while he was serving as finance minister of Germany. In contrast he claimed he was criticized that he was too generous.

When discussion came to Italy’s draft budget and the European Commission decision to reject it on grounds it was a deviation from agreed rules, key work “agreed rules” Schaeuble immediately jumped in bring back his favorite topic: Greece.

“I would have enjoyed if all these people who are now saying this in relation to Italy would have supported me in the times when we tried to tell the Greek people that they have to respect the rules.”

When the journalists asked him about the criticism that he “went too far with Greece,” he rejected it.

“Accusations in my own Parliament were that I had been too generous in relation to Greece,” Schaeuble said adding “And that was also true because Greece didn’t respect the rules.”

The old chap may be right because he fell in his own trap which he set already in August 2011 when he had drafted a plan to kick Greece out of the eurozone. Then his even more conservative colleagues were certainly disappointed and critizied him for this.

But “generous?” Even my cat finds the joke is very bad.

PS I wrote many times in older posts that Schaeuble was so obsessed with Greece that he would be mumbling “Greece respect the agreed rules” in his dying bed. I am confirmed, for one more time 🙂