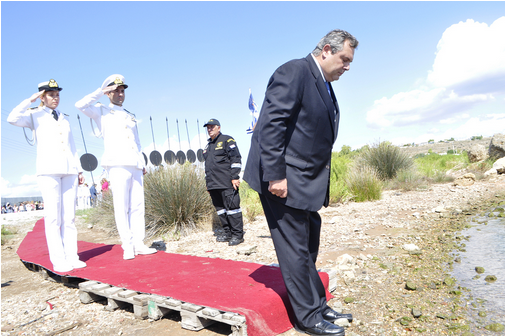 Junior coalition partner Panos Kammenos announced on Sunday morning that he pulls all his ministers from the government and he also resigns from the post of Defense Minister. The leader of right-wing Independent Greeks (ANEL) has repeatedly warned that he would leave the government should the Prespes Agreement with the Former Yugoslav Republic of Macedonia comes for ratification to the Parliament.

“The issue of Macedonia does not allow me to not sacrifice the chair,” Kamennos said after a 45-minute meeting with Prime Minister Alexis Tsipras on Sunday morning.

After the Parliament in FYROM ratified the country’s name change on Friday evening, Tsipras called for a meeting with Kammenos, urging him to clarify his position.

It is not immediately clear, whether all four ANEL ministers, among them Tourism Minister Elena Kountoura and Diaspora Minister Terence Quick, would comply with Kammenos’ decision.

So far, there is not official reaction by the Prime Minister’s office. High-ranking SYRIZA officials have been claiming that the Prespes Agreement would be ratified even without ANEL votes. Some independent lawmakers and small opposition party To Potami have declared to vote in favor.

With ANEL out of coalition, Tsipras is in the difficult position to lead a minority government. He is forced to ask the Parliament for a vote of confidence. If he does not survive it, snap elections would take place in the next 100 days.

Kammenos said that he will support the confidence vote if it is not linked to the Prespes Agreement.

Before the meeting, Kammenos attended the Sunday mass and took the communion – just like the fighters of the Greek Revolution against the Ottomans in 1821 before going into the battlefield….