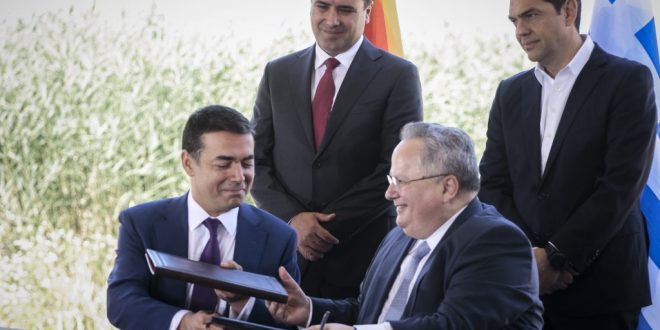 “If the Prespes Agreement does not come into effect the consequences will be profound and dangerous,” UN Secretary-General’s Personal Envoy for the talks between Greece and The former Yugoslav Republic of Macedonia, Matthew Nimetz said in an exclusive interview with Athens news agency.

In response to a question by ANA, whether it would be likely that there could be a renegotiation of the Prespes Agreement [as New Democracy leader K. Mitsotakis announced he would do when he comes to power], after clarifying that this is totally a matter of personal judgment and opinion, Ambassador Nimetz said:

“I would first note that the two parties worked in good faith to resolve this dispute since the signing of the Interim Agreement in September 1995, nearly 25 years of effort.  Agreement was finally reached, after so many years of intense discussion and hard negotiation, because each side believed it had achieved the essential elements of its national interests, and that peace, security and friendship were more likely to occur with this agreement than by continuing the dispute.  If the Prespes Agreement were not to come into effect, in my opinion, the consequences of failure would be profound, and both sides might well reconsider many elements that had been agreed to.”

The veteran U.S. diplomat stressed that he doesn’t believe a “quick fix” would be likely regarding this carefully negotiated agreement.

“I can foresee many different scenarios that might be possible, some of them quite risky. My best estimate is that reaching a new agreement would take years, not months, given that all the issues (including a change in the name of the State erga omnes) would once again be on the table, and given that there are likely to be different political dynamics in both countries as well as changes in the regional and global environment.  Of course I emphasize that this is my personal opinion thinking about the future, and others may differ from my assessment”, Nimetz added.

To a question on “whether a “macedonian language” has been recognized by the Unites Nations, Nimetz revealed that the official forms of country names, including languages, that were updated by the United Nations Group of Experts on Geographical Names (UNGEGN), includes in  the entry for “The Former Yugoslav Republic of Macedonia” and under the heading “Language”, the term “mk: Macedonian.”

“Please note that in 1992 the United Nations Group of Experts on Geographical Names (UNGEGN) began updating the official forms of country names, including languages, which was initiated in 1986, and this list is maintained on an updated basis and accessible by website for 194 countries. This work is undertaken at the request of the United Nations Conference on the Standardization of Geographical Names.  On page 94 of this document there is the entry for “The Former Yugoslav Republic of Macedonia” and the entry under the heading “Language” is    “mk: Macedonian”.”

Ambassador Nimetz added on an unofficial basis, that “if one accesses Google/Translate, which is used throughout the world, “Macedonian” is one of the languages listed; of course this is totally unofficial.” via greeknewsonline