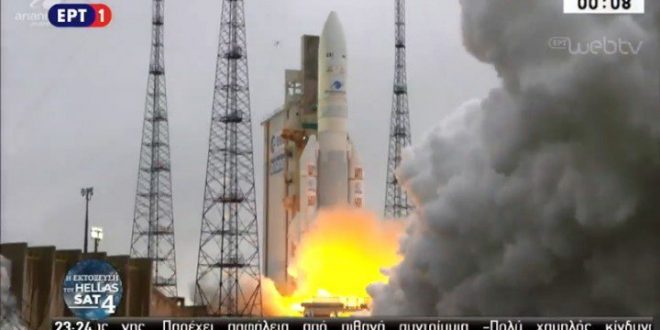 The Greek satellite Hellas Sat 4 was successfully launched from French Guiana at 23:01, in order to take up the orbital position of Greece and Cyprus.

Minister of Digital Policy, Telecommunications and Media Nikos Pappas, in statements to public broadcaster ERT, said it was a very important step.

“After the launch of Hellas Sat 4, Greece will have two satellites in the Greek orbital position. It is a very important step. We are now far from the time when a part of the political system did not understand that we needed to have a comprehensive strategy for space. The launch of Hellas Sat 4 will increase our capabilities for autonomous satellite communications, defense and security,” he said, according to amna.gr

HELLAS SAT4 was launched by ARIANESPACE. For its first launch of 2019, Arianespace will orbit two telecommunications satellites using an Ariane 5 from the Guiana Space Center: Saudi Geostationary Satellite 1/Hellas Sat 4, a condosat for KACST (and Hellas Sat; along with GSAT-31 for the Indian Space Research Organisation (ISRO).

HS-4/SGS-1 will provide telecommunications capabilities, including television, Internet, telephone and secure communications in the Middle East, South Africa and Europe.

With a design life of more than 15 years with orbital maneuver up to 23 years, HS-4/SGS-1 will be positioned at 39° East and will join Hellas Sat 3, launched by Arianespace on June 28, 2017 from the Guiana Space Center (on Flight VA238).

HS-4/SGS-1 will be the 22nd satellites orbited for the Middle East region, accompanying the development of middle-eastern space programs. Headquartered in Bethesda, Maryland, USA, Lockheed Martin Space designed, assembled and integrated the HS-4/SGS-1 satellite in its Denver, Colorado and Sunnyvale, California facilities. HS-4/SGS-1 will be the 46th Lockheed Martin satellite to be launched by Arianespace, whose backlog comprises one additional satellite built by the American manufacturer.

PS As everybody understands, the HELLAS SAT4 is not 100% Greek but occupies a place in an Arab founded Satellite…I have no idea how much it cost for Greece.

And as many households in Athens understood today, there were several TV and Internet problems during the small storm that swept over the Greek capital. Maybe the problem is over, when the Hellas Sattelite takes over.