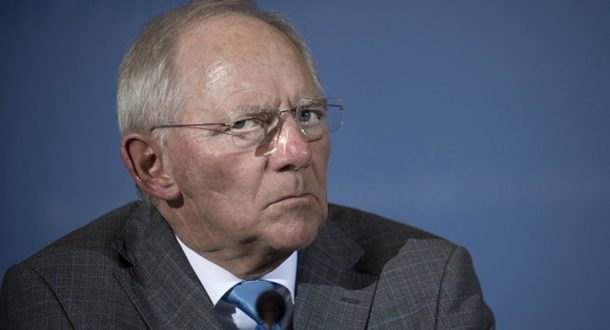 March 22, 2019 Economy Comments Off on Schaeuble wanted to resign after his 10-year Grexit plan was rejected 199 Views

Nine years after Greece surrendered to international creditors and three tough bailout agreements with strict austerity, former German Finance Minister Wolfgang Schaeuble told the Financial Times that he was a fierce supporter of Grexit from the very beginning. He also admitted that he wanted to resign when his Grexit plan was rejected in 2015.

As Angela Merkel’s finance minister from 2009 to 2017, Schaeuble was at the heart of efforts to steer the eurozone through a period of unprecedented turbulence.

Being the architect of austerity, a fiscal hawk whose policy prescriptions during the euro crisis caused untold hardship for millions of ordinary people, or so his critics say.

“He became a hate figure, especially in Greece,” the FT notes recalling posters in Athens in 2015 depicted him with a Hitler moustache below the words: “Wanted — for mass poverty and devastation”.

To the accusation that he didn’t care enough about the suffering of the southern Europeans, Schaeuble replied “Well I’m sad, because I played a part in all of that,” he says, wistfully. “And I think about how we could have done it differently.”

The original mistake was in trying to create a common currency without a “common economic, employment and social policy” for all eurozone member states.

But apart from his ideas about the eurozone, for Schaeuble Greece was a particularly thorny problem.

Greece should never have been admitted to the euro club in the first place, he said.

But when its debt crisis first blew up, it should have taken a 10-year “timeout” from the eurozone — an idea he first floated with Giorgos Papakonstantinou [Papandreou government, PASOK], his Greek counterpart between 2009 and 2011.

“I told him you need to be able to devalue your currency, you’re not competitive,” he says.

The reforms required to repair the Greek economy were going to be “hard to achieve in a democracy”. “That’s why you need to leave the euro for a certain period. But everyone said there was no chance of that.”

The idea didn’t go away, though. Schäuble pushed for a temporary “Grexit” in 2015, during another round of the debt crisis. But Merkel and the other EU heads of government nixed the idea.

He revealed to financial times that he thought about resigning over the issue.

“On the morning the decision was made, [Merkel] said to me: ‘You’ll carry on?’ . . . But that was one of the instances where we were very close [to my stepping down].”

We should recall that Schaeuble had smitten the Grexit plan probably right at the begin of the Greek crisis and tabled to PASOK government in summer 2011. In 2015 he was insisting on what he called a temporary exit of 5 years. Of course, the sneaky south German had 10 years in mind and not 5, as we learn today.

All lies, from begin to the very end by the Ghost of Christmas Past….

PS Had he resigned in 2015 the eurozone and the world might have been better places and we have had a better sleep over the weeks and months to follow.