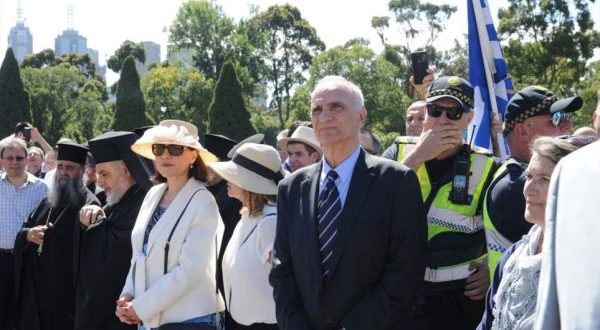 Diaspora Greeks in Melbourne verbally attacked Vice Parliament Speaker and SYRIZA MP, Giorgos Varemenos, who represented the government at the parade of the Greek Independence Day. Reason for the organized vulgar outrage against the politician was the Prespes Agreement, Greece signed with North Macedonia, former FYROM.

When the parade concluded and Varemnos started his speech, members of the audience started to shout “Greece, Greece, Macedonia”, to call him a “thug” and the government in Athens “traitors.”

They booed him non stop and called him “traitor” and “thug”.

The group of the “Macedonia protesters” were reportedly some 50 people among hundreds of members of the Greek community in Melbourne  who attended the parade peacefully and without patriotic fanfares and disrespect.

In a statement Giorgos Varemenos expressed his surprise about media reports in Greece that “reproduce the vulgar expressions” and “create the impression I rushed to leave the area running.”

According to the vice Parliament Speaker, the so-called protesters were a group of people who tried to tried to blemish a sacred site [the area where the parade was held in dedicated to Fallen War Heroes] with the well-known fascist slogan against politicians.”

Based on comments on social media, the “protesters” were affiliated to the local branch of far-right Golden Dawn.

And many write that “if diaspora Greeks continue like this they will never get a voting right in Greece.”