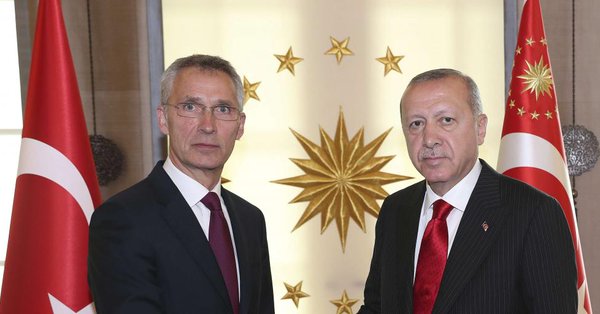 “We expect our NATO allies to act in accordance with spirit of alliance and protect its founding values,” Erdogan said during a meeting with NATO General Secretary Jens Stoltenberg in Ankara on Monday, in the context of the North Atlantic Council Mediterranean Dialogue Meeting.

The only expectation that Turkey has for NATO is that the organization act as a true ally to the country, the Turkish president said.

“We will protect Turkish Cypriots as a guarantor country,” he added.

Erdogan apparently is seeking the support of the NATO after the United State and the European Union voiced concerns over the Turkish plans for drilling in the Exclusive Economic Zone of Cyprus.

Cyprus is not a member of NATO but will the Alliance intervene in any way?

It is not known how Stoltenberg reacted to Erdogan’s call, however, he tweeted:

Pleased to be back in Ankara to meet with @RTErdogan. #Turkey is a highly valued Ally & #NATO stands in solidarity with Turkey as it faces serious security challenges. pic.twitter.com/lFQwImLKto

During his speech, Erdogan also said that Turkey rejected arguments claiming its deal to purchase Russian S-400 defense systems meant Ankara was looking for alternatives in its international ties. “The S-400 are a matter of national security,” he stressed.

PS the next we could expect from Erdogan would be the activation of Article 5 of the NATO. Too bad for him that such a move needs the consent of all members. Alternatively he could invoke Article 4, according to which members can bring any issue of concern, especially related to the security of a member country, to the table for discussion within the North Atlantic Council.

Article 5 is the cornerstone of the NATO and states that an attack on one member of NATO is an attack on all of its members. But despite its importance, NATO has only invoked Article 5 once in its history.