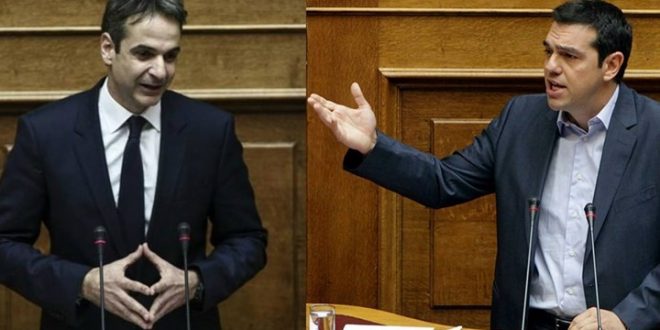 Op-Ed: European elections in Greece shrink into a Tsirpas-Mitsotakis duel

May 21, 2019 Editor, Greece Comments Off on Op-Ed: European elections in Greece shrink into a Tsirpas-Mitsotakis duel 336 Views

There is little about Europe in the election campaigns of the Greek political parties. A week before the elections on May 26, the agenda has been limited into a duel between prime Minister Alexis Tsipras and his potential successor Kyriakos Mitsotakis, leader of conservative New Democracy. Smaller parties like KINAL/PASOK or To Potami and communist KKE follow the example, especially when it comes to debates broadcast by television channels. The challenge is too big to be bypassed or ignored.

In following such a duel strategy, both SYRIZA and ND have completely forgotten the aim of the EU Parliament elections, the most crucial elections for the future of the EU, and left aside the reasons for which aspiring MEPs from party X or Y are worth to be voted for.

Dangerous rising of the far-right and euro-skepticism? Climate change? Migration? Security issues? These issues may be on the agenda of the EP but not in Greece.

Here is the short planning of petty politics that beats the drum of the elections agenda.

Day in, day out, from morning to the evening, television channels -the main source of information for Greeks above a certain age – bombard viewers with the slug-fest delivered by Tsipras and Mitsotakis.

It looks as if the parliamentary elections would stand right outside our doors.

Swept away by the ambitious, aggressive even though empty worded elections strategy of New Democracy that criticizes every A and O and cough by the Prime Minister and the rest of cabinet and SYRIZa officials, Alexis Tsipras went so far on Tuesday to say “On Sunday, people will give either a vote of confidence for the relief measures, or they will vote to have them void.”

Ten days before the elections, the prime minister announced several “relief measures” that include Value Added Tax reductions in food items, energy and electricity and gave a so-called ’13th pension’ to the country’s pensioners.

Tsipras argues towards the voters that the measures are permanent and that they will be erased should main opposition party win on Sunday and consequently on the next parliamentary elections.

On its part, the central elections advertisement by ND promises “tax decreases and better jobs.” Note: in Greece, not in Europe.

Are we changing the government on May 26? No, we don’t.

A striking example of the Tsipras-Mitsotakis confrontation was the distribution of the 13th pension over the weekend. For hours we heard the ND leader to call on pensioners to down vote the ruling party because the extra “pension was not in full but it included tax and health contributions,” so the argument. On his part, Tsipras called on pensioners to take into consideration that the measure was permanent and that they will receive the bonus if he stays in power.

But what does the EP elections have to do with the relief measures and the Greeks’ taxation? In the context of EU elections …fairly nothing if one does not take into consideration the country’s lenders. Except that should ND emerge as a winner on Sunday night, and thus with a large margin, most likely SYRIZA will be forced to call snap elections in June; that is 3-4 months earlier than Tsipras’ plan. Not to mention that ND will be squeaking morning to late at night that the government has to resign. But Mitsotakis has been calling for early elections ever since he was elected leader of ND in February 2016, anyway.

It should be noted that small parties that received up to 1.2% in public opinion polls, are mostly  nationalist or against the “hegemony of the European Union” or against the eurozone. They stress these messages on their elections ads. Yet, they are not powerful enough or are been promoted not enough to set a European agenda on TV debates.

What is the stake of the European elections for which millions of Greeks are going to cast their vote on Sunday? The usual Greek thing: omphaloscopy. The act to contemplate over one’s navel and forget the rest of the world.