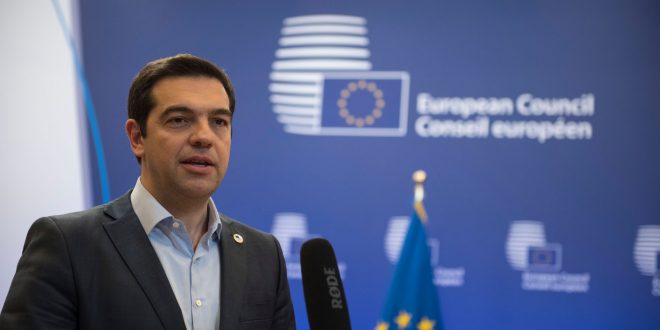 Tsipras at EU Summit: Measures and sanctions against Turkey if no immediate stop of violations

June 20, 2019 World Comments Off on Tsipras at EU Summit: Measures and sanctions against Turkey if no immediate stop of violations 143 Views

Greek Prime Minister Alexis Tsipras has called on European leaders to take measures and sanctions against Turkey, if it does not stop violations of International Law and provocative actions in the Eastern Mediterranean Sea.

Arriving at the European Council Summit in Brussels, Tsipras said “A clear message must be given to Turkey to immediately stop the violation of international law, the illegal activities within the Exclusive Economic Zone of Cyprus. We will look at every possibility that if there is no immediate end to these violations, take appropriate measures and sanctions.”

At the same time, he expressed hope that the European Council takes another important decision regarding the next President of the European Commission.

Referring to conservative European People’s Party candidate, German arch-conservative from the CSU, Manfred Weber, Tsipras the Council should “to rule out the possibility that for the next 5 years, the European Commission President will be a politician who does not unite but divide Europe.”

Progressive leaders of the EU can not welcome a candidate who has utterly expressed against the countries of the European South but also against our common values such as solidarity and social convergence,” The Greek Prime Minister stressed expressing once again his support for Dutch Frans Timmermans.

Alexis Tsipras thanked Timmermans and PES for statements of support to Cyprus and called for the support of progressive leaders in his effort today to have a clear condemnation and concrete EU measures against Turkey’s illegal activities in the EEZ of Cyprus.

It is worth nothing, that while, Greece and Cyprus launch their joint offensive against Turkey in the European framework, Ankara sent its second vessel for oil exploitation, Yavuz, in East Mediterranean on Thursday. The vessel is scheduled to start operation in the well Karpaz-1 in the bay of Famagusta in the Turkish occupied territory of North Cyprus beginning of July.

PS So far, it is not clear what Greece and Cyprus have in mind with regards to sanctions against Turkey, but I wouldn’t be surprised if the EU leaders decide to restrict visas for Turkish citizens, which will be a blow for President Recep Tayyip Erdogan and his many AKP followers.