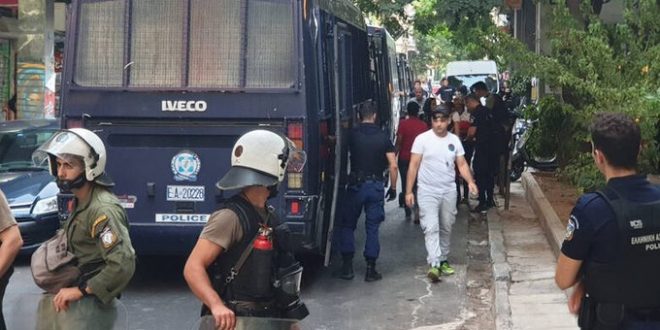 The spokesman of the Greek Police Union Federation POASY shocked on Monday morning when he described migrants evicted from squats in Exachria as “dust” with annoying character.”

Spokesman Stavros Balaskas was speaking to Skai TV commenting on the police operation in Exachia.

“One finger launched a silent new vacuum cleaner which is the police, which will slowly suck all the garbage from Exarchia progressively, democratically, with a plan by the police officers.”

When he was asked by reporters what he means with “garbage”, Balaskas said “We do not mean these people who are dust, which may be annoying but lack the key character for Exarchia. We mean the real rubbish in the other ten squats […] who are criminally harsh, they are extremists-leftists extremists anarchists, special people. “

Balaskas’ statements were sharply criticized by media, websites as well as on social media.

The Head of the Greek Police, Mihalis Karamalakis, ordered an internal, administrative investigation on Balaskas and his statements.

“It is announced that by order of the Chief of the Greek Police, Lieutenant General Mihalis Karamalakis, the Hellenic Police Headquarters transmits to the Athens Public Prosecutor’s Office the statements by a member of the Police Union during a television broadcast about today’s (26-08-2019) police operation in the area of ​​Exarchia,” a statement by the Greek Police said.

Speaking to Star TV during the evening news, Balaskas claimed that his statement was misinterpreted and that he never meant the migrants. He added that he was not POASY spokesman but just an elected member.