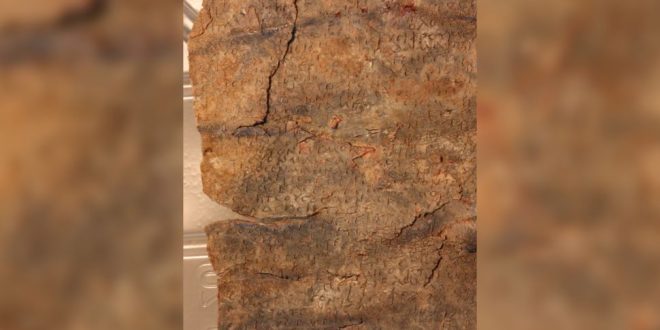 “Tie the feet together. Bind down the eyes, the hands, the feet…” Scientists have finally managed to decipher the Ancient Greek curse found on a 1,500-year-old lead tablet.

The curse calls upon numerous demons to inflict harm on a dancer named Manna, who likely performed at the famous Caesarea Maritima theater in Israel, which was built by Herod the Great.

The Greek engraving on the tablet reveals a curse “that may rival the modern-day backstabbing between athletic opponents,” notes livescience.com

The fact that the tablet was found in the ruins of such a prestigious theater suggests that Manna “must have been a famous artist and therefore the prize would have been considerable, not to mention the fame and reputation that were at stake,” for the winner of a dance competition, wrote Attilio Mastrocinque, a professor of Roman history at the University of Verona, detailing his translation of the Greek curse in an article published in the book “Studies in Honour of Roger S.O. Tomlin.”

And the person cursing Manna wasn’t messing around: “Tie the feet together, hinder the dance of Manna,” the curse tablet, inscribed in Greek, reads, according to Mastrocinque’s translation. “Bind down the eyes, the hands, the feet, which should be slack for Manna when he will dance in the theatre…”

“Twist, darken, bind down, bind down together the eyes…” of Manna the inscription says. “He should move slowly and lose his equilibrium” and “he should be bent and unseemly…”

The curse tablet was discovered by an Italian archaeological team sometime between 1949 and 1954, but the inscription was difficult to make out. It was only recently that Mastrocinque deciphered it, using a method called Reflectance Transformation Imaging (RTI). With RTI, a computer program creates numerous photographs of an artifact — taken from different lighting angles — to create an enhanced image.

The curse tablet dates to the sixth century, a time when the Byzantine Empire controlled the city.

Taking that period into account, it’s possible that Manna and the curse-writer were from warring factions. In the Byzantine Empire, people competing in dance or other competitions were sometimes part of rival factions — such as the “blue” and “green” factions — and the competition between these factions could be intense, sometimes even resulting in public riots, Mastrocinque wrote.

Whatever the reason, the curse tablet is lengthy, containing 110 lines. While the Byzantine Empire used Christianity as its official religion, and Christianity didn’t worship Thoth and other “pagan” gods often named in curse tablets, this didn’t stop the use of curse tablets, Mastrocinque wrote, noting that if anything these tablets became longer and more detailed.

“This [curse tablet] along with many others issued in the late imperial period and in the early Middle Ages, confirms that the Christianization of the Roman Empire did not stop the maleficent magical arts… on the contrary, these increasingly spread and became more sophisticated,” Mastrocinque wrote.

The tablet was given to the team by the Israeli government and it is now in the Archaeological Museum of Milan. ( livescience.com)