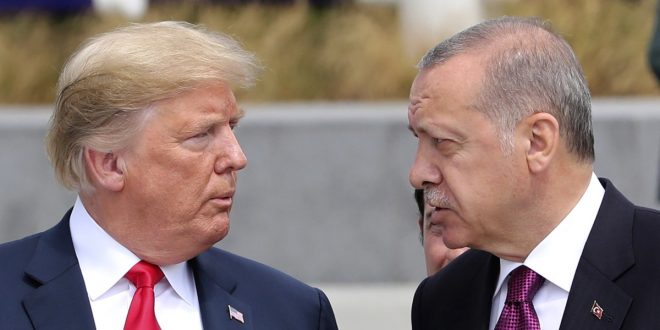 “We are prepared to impose additional sanctions on Government of Turkey officials and entities, as necessary,” the department said in a statement.

According to U.S. law, those mentioned on the sanctions list face blocking of their properties (if any) and are prevented from having trade relations with the U.S.

The U.S. has imposed new sanctions against Turkish officials and institutions over the country’s incursion into northern Syria, Treasury Secretary Steve Mnuchin and Vice President Mike Pence announced outside the White House on Monday.

Specifically, Mnuchin said the U.S. has sanctioned three Turkish ministers along with their department of defense and ministry of energy. Pence told reporters Mr. Trump spoke to Turkish President Recep Tayyip Erdogan Monday and called for an immediate ceasefire as Turkish troops move further into Syria.

“The president of the United States called on the president of Turkey to stop the invasion,” Pence said. He added that Trump signed an executive order authorizing the sanctions and directed him to lead a delegation to Turkey to begin negotiating a resolution between the Turks and Kurds.

The president also ordered a hike on steel tariffs and immediately canceled negotiations over a $100 billion trade deal with Turkey.

The executive order authorizes the treasury secretary to sanction Turkish officials for “actions or policies that further threaten the peace, security, stability, or territorial integrity of Syria.”

In an earlier statement, the president said he was “fully prepared to swiftly destroy Turkey’s economy if Turkish leaders continue down this dangerous and destructive path.”

The move represents the administration’s first concrete effort to punish Turkey, a NATO ally, for its incursion into areas held by Kurdish allies of the U.S. after the president ordered a hasty removal of troops from northern Syria last week.

“If Turkey’s operation continues, it will exacerbate a growing and daunting humanitarian crisis, with potentially disastrous consequences,” Secretary of State Mike Pompeo said in a statement.

PS Before Trump destroys Turkey’s economy and earns a new enemy, he should better remember to remove the US nuclear weapons stored in the Incirlik Air base in South-West Turkey, some 100 km away form Syria.