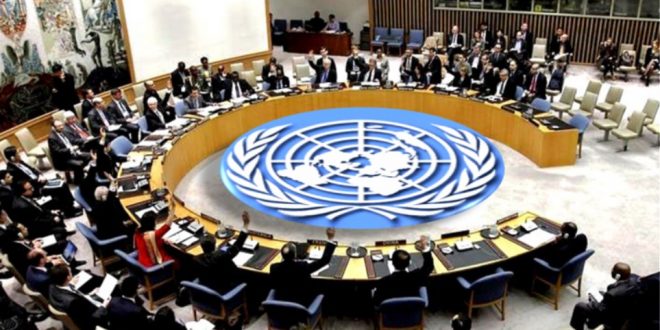 Turkey has sent a letter to United Nations General Assembly is which it accused Cyprus of “ethnic cleansing against Turkish Cypriots between 1963 and 1975.” The letter submitted by the Turkey’s permanent representative to UN, is dated October 9, the day Turkey started its military operation against Syria.

The letter claims that the division of the island began in 1963, “when Greek Cypriots expelled Turkish Cypriots from the partnership state organs and institutions, as well as from their homes, in violation of the treaties of 1960 and all human rights norms. From 1963 until In 1974, the Greek Cypriots carried out an armed ethnic cleansing campaign against the Turkish Cypriots, who had to live in siege enclaves corresponding to 3% of the surface of the island.”

The letter submitted by Turkish diplomat, Feridun Sinirlioglu, was reportedly aiming to protest the statement by the Prime Minister of Greece during the general debate of the 74th session of the UN General Assembly. The letter was released as an official document on Friday.

“We stress the need to set the record straight, the Cyprus dispute is not an issue of “invasion” or “occupation”, but an issue of the renewal of a partnership between the co-owners of the island, which was destroyed by the Greek Cypriot side in 1963,”  Turkey claims.

When this culminated in a coup d’état in 1974, aimed at annexing the island to Greece, Turkey was left with no other option but to exercise its rights emanating from the treaties of 1960, within the framework of its rights and obligations as a guarantor power, the letter said.

“Since then, Turkish forces have been the only factor preventing the repetition of earlier tragedies,” the Turkish letter to UN said. 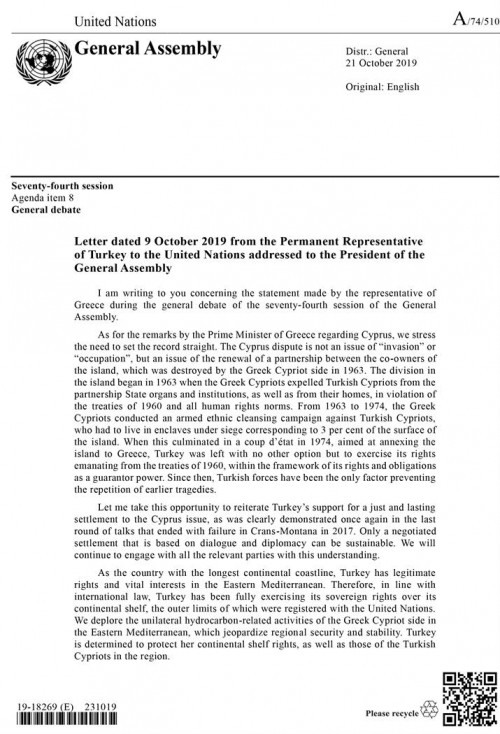 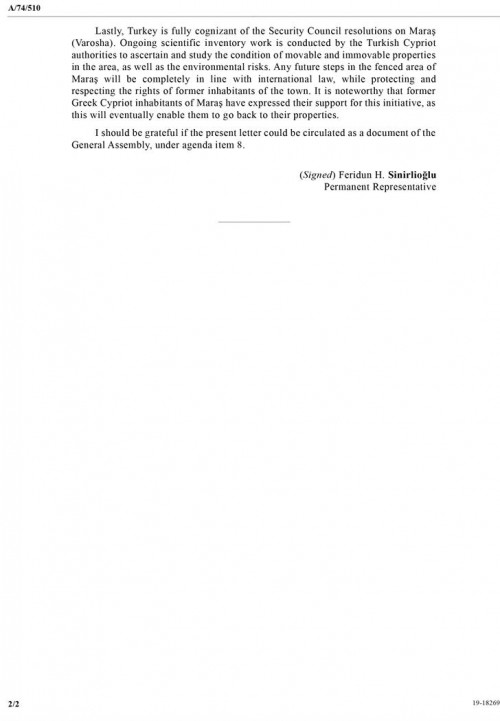 The letter  is yet another unacceptable and baseless act aimed at creating distractions, even justifying the island’s occupation,” Cypriot government spokesman, Prodromos Prodromou.

He announced that “the letter would not go unanswered.”

Speaking to reporters on Saturday, Prodromou said the issue is being handled by the foreign affairs ministry.

“We are talking about yet another unacceptable and groundless action by Turkey in its attempt to create distractions and a climate of tension, or even justify the occupation of Cyprus,” Prodromou said.