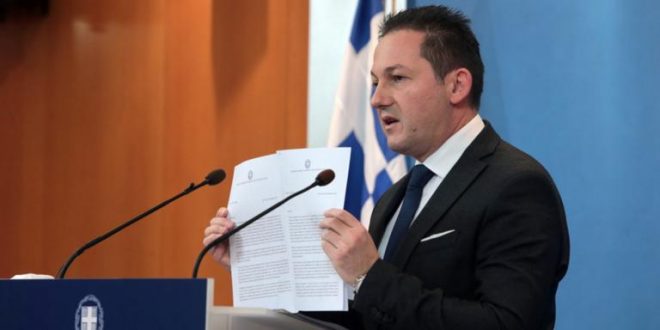 Greece has lodged objections to the United Nations over the agreement between Libya and Turkey mapping out maritime boundaries as a violation of international law, the Greek government spokesman said on Tuesday.

“This agreement was compiled in bad faith, it violates the Law of the Sea” government spokesman Stelios Petsas told reporters.

He said that the Greek Foreign Ministry sent two letters to United Nations, one to the President of the Security Council and one to the Secretary General of UN.

The letters sent on Monday outline Greece’s positions on the Turkey-Libya agreement and present the legal arguments that support its case, based on the international Law of the Sea.

The letter to the Security Council presidency points out that the Turkey-Libya agreement was drawn up in bad faith and violates the Law of the Sea, since the maritime zones of Turkey and Libya are not adjacent and there is no common maritime border between the two countries. In addition, it points out, the agreement does not take into account the Greek islands and their right to have maritime zones (continental shelf and Exclusive Economic Zone).

It says that the agreement is invalid since it has not been approved by the Libyan parliament, as attested to by a letter from the Libyan Parliament speaker to the UN Secretary General. For this reason, the letter notes, Greece rejects the entire agreement as invalid and not capable of affecting Greek sovereign rights.

It also points out that the signature of the “Agreement” disrupts peace and security in the region and asks that this be pointed out to the Security Council so that it might condemn the agreement as contrary to international legality and call on Turkey and Libya to abstain from any act that might violate Greece’s sovereign rights and escalate tension in the region.

The letter to UN Secretary General Antonio Guterres presents the same arguments and requests that the agreement, being invalid, should not be registered at the UN and published in the UN Division for Ocean Affairs and the Law of the Sea. It also notes that the issue should be put to the Security Council, Petsas said.

The government spokesman said that the government has launched diplomatic initiatives on a European and international level on this issue, which are already yielding results.

Among others, he said, Foreign Minister Nikos Dendias presented Greece’s arguments to his European counterparts in Brussels and asked for a clear condemnation of these memoranda, as well as a framework of sanctions if Turkey and the Tripoli government fail to comply, as well as support for Greece and Cyprus.

Prime Minister Kyriakos Mitsotakis will raise the issue at the European Council on Thursday and Friday.