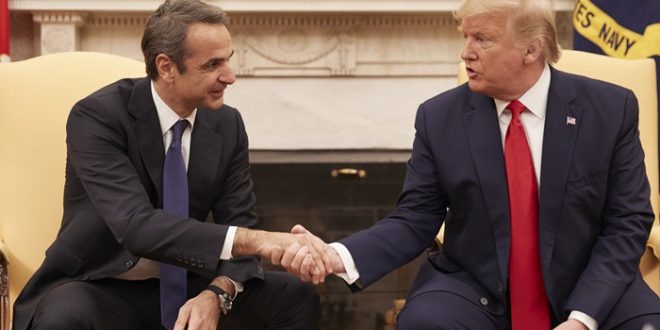 Athens described the meeting between Prime Minister Kyriakos Mitsotakis and US President Donald Trump as “excellent”, while the PM said that he was very pleased. Top on the agenda of the Greek side was the Turkish aggression in the East Mediterranean Sea and Ankara’s agreement with Libya. However, despite the Greek expectations, the US President did not take position on the matter. Yet, unpredictable Trump was polite enough not to mention his “good friend Erdogan” or to say publicly that the US would need air bases in Turkey, should the American-Iranian conflict escalate.

The Turkey-Libya agreement causes destabilization, Mitsotakis said on camera at the Oval Office on Tuesday evening. He also noted that Greece expects the US’s support on the matter and added that his country is an ally the US can rely on.

US President Donald Trump referred to the geostrategic importance and history of Greece. He described Greek-American relations as “amazing” and noted that they are the closest they have ever been. He made a special reference to the Greek economy, noting that Greece has managed to recover very quickly.

“Greece and its recovery are a huge success,” the US President underlined. He did not waste a single word on Turkey and left Greeks sitting alone on their expectations bench.

The meeting in front of the Oval office fireplace turned awkward anyway, when Trump decided to break with the diplomatic tradition and make statements before the meeting with Mitsotakis. It is worth noting that no joint statements were scheduled after the talks between the two leaders. Donald Trump was obviously trying to avoid reporters’ questions on crucial issues like his impeachment and Iran. In this sense, he held his short speech, leaving the Greek Premier wondering about his own statements.

On camera and behind close doors, for one more time the Greek side invited US enterprises to invent in Greece. On strategic level, it pledged to purchase F-35 fighter jets, proceed with the upgrade of F-16 and being the best US supporter, most stable and predictable NATO partner in the wider region by offering the four bases for common goals.

Negotiations on Greece’s participation in the F-35 program aimed at acquiring a squadron of new technology aircraft will soon begin, Mitsotakis told reporters. He added that the aim is to proceed with the purchase as soon as the F-16 upgrading is completed and depending on the country’s finances. This is expected to be based on the production capabilities of the F-35 from 2024 onward.

Q Are you willing to make a deal with Greece regarding F-35?

PRESIDENT TRUMP: So Greece and I, and my people and — we have a whole group of people. And as you see, they brought a lot of great representatives from Greece that we’ve been dealing with. We have a tremendous Greek population — over 3 million people, as I understand it. That’s fantastic. I think I know — I really feel I know most of them. I think I know all of them, come to think of it. But it’s a great population in the United States.

PRIME MINISTER MITSOTAKIS: Let me add something to that.

PRESIDENT TRUMP: We have a really great relationship with Greece.

PRIME MINISTER MITSOTAKIS: Let me add something to that: Greece is interested, Mr. President, in participating in the F-35 program. As you know, we are already upgrading our F-16s.

PRIME MINISTER MITSOTAKIS: And that program will be completed in 2023, 2024. So we’re very much interested in participating in the F-35 program after that. And I’m sure that the U.S. will take into consideration the fact that this country is coming out of an economic crisis, in terms of structuring the program in the best possible way for my country.

PRESIDENT TRUMP: That’s true. And, you know, they just signed a very big renovation of existing aircraft. They have great aircraft, but it’s gotten a little bit tired. And they’ve done a renovation that’s going to bring it up to brand new, and we look forward to doing that. A couple of our great companies are doing it. Okay? (via White  House Press Office)

The question is, of course, what did Washington offer to Athens except the warm-welcome by Donald Trump and some alleged promises.

“All issues related to Greek sovereign rights were raised emphatically. It became clear to the American side that we would not tolerate any violation of our sovereign rights,” Mitsotakis told reporters. “We had a confirmation of the already excellent Greek-American relations, clear public stance on the positive course of Greek economy and a better understanding of President Trump himself on the geopolitical challenges of the region and how we can be part of the solution, not the problem ” he added.

Did he manage to push the Greek positions on national issues with regards to Turkish violations based on International Law? Not really…

Q Do you agree with — do you agree with Turkey’s provocations in Libya, in eastern Mediterranean, against Greece? And are you willing to talk to your friend, Erdoğan, to stop —

Q — to stop these provocations?

PRESIDENT TRUMP: Yeah. We’re talking to — when you’re talking about Libya, we’re discussing with President Erdoğan, we’re discussing many other countries. I just spoke with the Chancellor of Germany, with Angela, and we talked about that subject specifically — Libya and what’s going on. We’ll be talking to Russia; they’re involved. A lot of countries are involved with respect to Libya. And it’s, right now, a mess.

PRIME MINISTER MITSOTAKIS: One point. One second. One point on this issue. I think it is important to point out that the agreement signed between Turkey and Libya infringe upon Greece’s sovereign rights and essentially cause great concern and instability in a region which is already highly problematic.

PRIME MINISTER MITSOTAKIS: So we’ll be very much looking to your support to make sure that these types of provocative agreements are not being put into place. And I think we should refrain, in general, in the eastern Mediterranean, for any sort of activity that inflames passions and that doesn’t, you know, promote regional peace and security. So we’ll be very much looking forward to your support on this issue because it is a very important issue for my country. (via White  House Press Office)

Government spokesman Stelios Petas said after the meeting that Mitsotakis’ intervention on Turkey’s provocations was “decisive” – apparently in the same wavelength of the government line that Greece has managed “to isolate Turkey internationally.”

PS Several Greek media describe the Mitsotakis-Trump meeting as a “fiasco”; we would rather say it politely it was a visit “in the wrong place at a wrong time…”