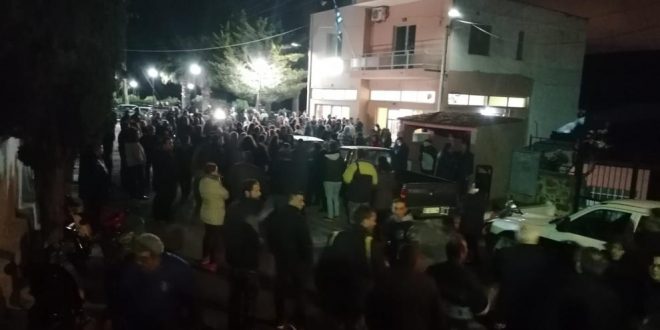 Locals are angry, asylum seekers are exhausted. Both groups have reached the limits of their patience. Residents of the village Moria symbolically occupied the building of the General Secretariat of the Aegean & Islands Policy on Tuesday morning as a response to the unprecedented incidents and protest by asylum seekers a day earlier. At the same time, a group of Afghans have gathered outside the Municipality Theater in Mytilene reportedly chanting “Lesvos people, we are sorry!” Local media report that residents also from surrounding villages participate in the occupation.

The community of Moria took the occupation decision on Monday evening after a group of some 300 asylum seekers “mainly form Afghanistan” passed through the village after they returned  from the protest in the island’s capital Mytilini.

When the situation seemed to escalate the church bells tolled and the residents rushed to the village square and the community house.

A fire set in an abandoned warehouse triggered new tensions with the locals accusing the asylum seekers for the fire.

The community demanded a permanent police squad to be deployed at the entrance of the village and police patrols. Minister for Citizen Protection Michalis Chrysochoidis has reportedly satisfied the request.

Moria residents complain about “the tragic situation” in their village with the overcrowded hot spot nearby. “We want our village back,” they say.

Apparently exhausted from the tension a day earlier, only 50 out of the 300 residents of Moria found their way to the Aegean Policy building on Tuesday morning.

Migration Minister, Notis Mitarakis, worsened the situation by claiming that the Monday protests were incited. However, he did not elaborate by whom.

On Tuesday morning, the chairman of the Moria community, Giannis Mastrogiannis, accused non-governmental organizations for the protests on Monday. He linked the protest with the registration bill for the NGOs submitted to the Palriament on the protest day. He claimed further that the NGOs blackmail them so that they should hand over their plots to them.

“We had a general disruption, we also had a fire in an abandoned warehouse. My fellow citizens are furious and have now reached their limits,” Mastrogiannis told Alpha TV.

“The migrants were provocative. On Monday they wanted to provoke us, the police had not allowed them to pass through,” he added.

Asylum seekers, refugees and migrants want to be transferred to the mainland and humane living conditions.

According to latest data, there are currently 19,505 people living inside and outside the Moria hot spot, state broadcaster ERT TV reported.

Local authorities of Lesvos, Chios and Samos requested that the islands are declared in “state of emergency.” The central government in Athens turned down the request.