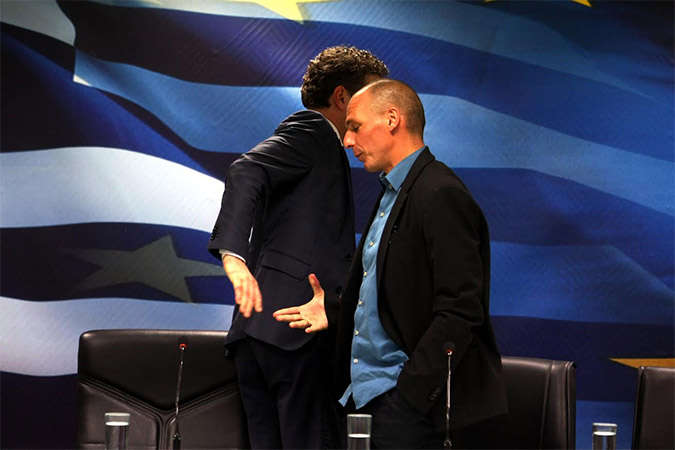 “You can hear Schaeuble’s voice saying that the profits from Greek bonds he wanted for the German budget,” Yanis Varoufakis revealed in an interview ahead of the controversial release of his secret recordings from the Eurogroup sessions in the first half of 2015.

“Don’t you want to hear Schaeuble speaking about the ECB’s profits from the Greek bonds?” he said in an interview with Skai TV late on Thursday.

Stressing that the promise to Samaras’ government in 2012 was that the profit would return to Greece, Varoufakisrevealed that then German finance minister Wolfgang Schaueble said during a Eurogroup meeting: “No, I need the for my budget. I have no obligation to pass it on to German citizens so that they understand what their own finance minister is doing in their own name. There is no democracy without transparency.”

He revealed that then Eurogroup head Jeroen Disslebloem had threatened with closure of the banks already at the first  meeting in February 2015.

He pointed out that the lenders”took back what they had promised” and “started to lie,” adding that he was expecting “a war.”

he revealed that IMF’s officer in charge of Greece Poul Thomsen and he had agreed on the Value Added Tax issue. “While we were preparing the announcements, he took everything back demanding [a new deal?] on Labor issues,” Varoufakis said adding “that’s lack of word of honor.”

The world has to learn all these things during the negotiations, it has to hear “how we argued when they were giving deadlines to Greece.”

He accused the EU lenders of cheating saying “they never went to the meetings with proposals, but they would come out and claim I was going there with proposals.”

Varoufakis announced that the unedited audio recordings will be uploaded on the website of his party MeRa25 on March 10, 2020. He added that he was not aware there were no minutes of the Eurogroup sessions, therefore there are no recordings of the first three sessions. The recordings are from some ten meetings.

Explaining his motives to release the recordings now, he said he has been bothered at  “50% from the SYRIZA’s [recent] governance review and 50% by Greek finance minister Christos Staikouras’ claims in the Parliament. He said that Varoufakis is to blame for the red loans and  that he has 40% responsibility for what he did in the Eurogorup.”

“Greeks must know what happened in that meeting,” Varoufakis stresses.

“It is my European duty to publish them,” he added, ‘so that also German citizens learn how their economic police is built.”

Varoufakis said that he has been thinking about possible legal implications for publishing the recordings.

“But there is a Supreme Court decision that covers me. Nevertheless as it is the public interest dictating this, I will do it, both for Greece and Europe” he said.

“Schaeuble is no different than someone who asks for fakelaki,” i.e. money under the hand, Varoufakis stressed, still furious about the ex German fiance minister.