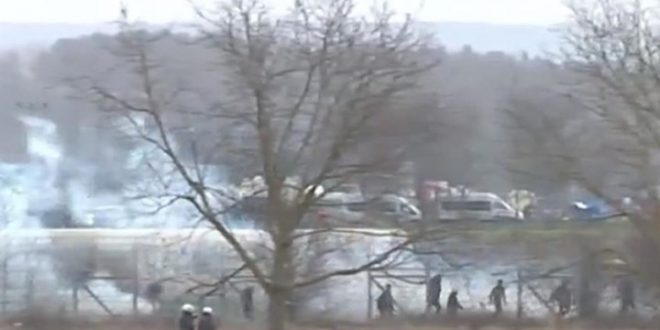 Tension erupted again at the closed customs office of Kastenies at Evros, when a group of migrants attempted to cross into Greece on Wednesday morning. Greek security forces deterred them using teargas and sound flares, the migrants reportedly threw stones and other objects.

It was initially though that it was the migrants firing the chemicals.

The group consisting of some 20 men withdrew to a make shift camp at the Turkish side.

Strong Greek police and army forces have been deployed along the fence around the Greek outpost.

Skai TV reported that initially the group targeted the outpost, then a group moved towards the South in an attempt to find a passage and cross into Greece.

With loudspeakers, Greek authorities were warning the migrants to not cross the border and that more Greek forces were nearing the fence.

A video from March 3, shows Turkish police or Gendarme throwing teargas at the Greek security forces.

Meanwhile in North-West Turkey, men, women and children keep walking towards the borders to Greece. They tell media, that they were told the borders were open.

27.823 attempts to cross the borders have been averted by the Greek Army and Greek police  from Saturday morning (February 29) until Tuesday night (March 3).

A total of 183 people were arrested at the same time, and sentenced up to 4 years imprisonment without parole.

According to Greek authorities majority of migrants are from Afghanistan, from Central Asia countries, from South Africa, people who are in Turkey long before the war in Syria.

Greek media reported that there were people also from Mongolia.

No new arrivals were recorded on the Aegean islands on Tuesday and Wednesday, so far, due to rough sea and winds blowing with intensity of up to 9 Beaufort.

Just two dinghy with total 73 people arrived at the islands of Kos and Farmakonissi on Wednesday morning, authorities said.

A little over 1,000 migrants and refugees arrived on Lesvos, Chios and Samos on Sunday and Monday (Mar 1-2).

With a Legislative Order Greece does not allow new arrivals on the islands after March 1 to submit asylum applications. New arrivals are supposed to be arrested and deported to their countries of origin, a long-lasting procedure.

Until then Greece is seeking solutions for the accommodation of these people.