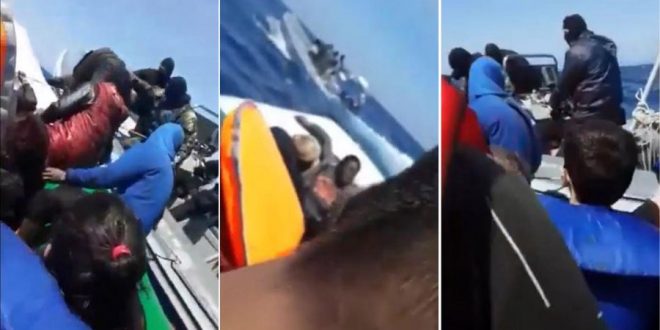 Greece vehemently rejects media reports often accompanied by footage, on collective pushbacks of migrants and refugees in the Aegean Sea. As as such reports have been increased, United Nations organization like the UN High Commissioner for Refugees (UNHCR) and the UN’s International Organization for Migration(IOM) call on Greece to investigate the multiple reports of the pushbacks allegatedly by Greek authorities at the country’s sea and land borders.

UNHCR urging Greece to investigate pushback allegations at both sea and land borders. We have continuously addressed our concerns with the Greek government on reports which have increased since March. https://t.co/of2H3HW5tL

UNHCR has continuously addressed its concerns with the Greek government and has called for urgent inquiries into a series of alleged incidents reported in media, many of which corroborated by non-governmental organizations and direct testimonies. Such allegations have increased since March and reports indicate that several groups of people may have been summarily returned after reaching Greek territory, the statement said among others.

Some 3,000 asylum seekers arrived in Greece by land and sea since the start of March, a precipitous drop from previous months and compared to previous years. Yet, the number of reported pushbacks, particularly at sea, has been rising, it added.

The UNHCR stressed that “Greece has the legitimate right to control its borders and manage irregular migration while respecting international human rights and refugee protection standards. Controls and practices must guarantee the rights of asylum seekers and they should not be turned away at Greece’s borders.”

Exclusive video by daily efsyn: adults and children spent hours in the water handing at a second migrants’ boat, when the engine of their boat died out. According to the denouncement, the Greek Costa Guard did nothing to help the people, but just watched. The incident reportedly took place off the island of Lesvos on June 4, 2020.

The incidents seem to be almost daily since the weather improved and more migrants try to cross into Greece and from there to Europe.

There are often complaints about men dressed in black who are involved in the pushbacks that violate international laws for the protection of people in the sea.

#Greece: “Masked gangs terrify #migrants as they force boats in Aegean back to Turkey”#PushBacks #RefugeesGrhttps://t.co/XlJ9btxxVG

IN another incident, a Danish patrol boat monitoring the Aegean sea as part of the Frontex operation, refused an order to push back migrants they rescued, Danish officials told public broadcaster DR.

The officials reportedly told DR that told DR that “the Greek coast guard has orders to try and prevent migrant boats from crossing the sea border between Turkey and Greece.”

The Danish boat was patrolling the sea between Turkey and Greece’s easternmost islands as part of Operation Poseidon, a border surveillance mission in support of Greece, coordinated by EU border protection agency Frontex.

Jens Møller, the police chief in charge of the Danish unit participating in the operation, told DR that the crew had rescued 33 migrants headed for Greece in a rubber dinghy when they received a radio order from Operation Poseidon’s headquarters to put the migrants back into to their dinghy and tow it out of Greek waters.

The crew refused the order, believing it would endanger the lives of the migrants. “The commander considered that [the order] was not justifiable,” Møller said, adding that he eventually managed to get the order overturned. The rescued migrants were brought to the Greek island of Kos.

Greece has rejected allegations of conducting pushback operations against migrant vessels seeking to reach its territory from Turkey via the Aegean Sea.

“The Greek coast guard always operates in accordance with the principles of international law,” Shipping Minister Ioannis Plakiotakis said during a press conference on Wednesday.

“It really makes us wonder when people try to play the game of Turkey… which is using desperate people to promote its own ends],” he added.

A few days prior to Plakiotakis’ presser, the International Organization for Migration (IOM) of the United Nations has issued a statement expressing its deep concern “about persistent reports of pushbacks and collective expulsions of migrants, in some cases violent, at the European Union (EU) border between Greece and Turkey.”

“International media reports and footage showing the use of marine rescue equipment to expel migrants across the Eastern Aegean Sea are especially disturbing,” the IOM said among others.

The organization stresses that it is “closely monitoring the situation and have received reports of migrants being arbitrarily arrested in Greece and pushed back to Turkey and violence perpetrated against migrants by some border personnel. ”

Also the IOM called on Greek authorities to investigate these allegations and testimonies given by people forced to cross the Greece-Turkey border.

“While states’ sovereign rights – including maintaining the integrity of borders – must be respected, their discretion ends where they overlap with international human rights obligations,” the IMO statement concluded.

In a letter to the Vice-President of the European Commission, Margaritis Schinas, and the Commissioner for Home Affairs, Ylva Johansson, Koumoutsakos proposed “the inclusion of an emergency and flexibility clause in the European Migration and Asylum Agreement.”

In particular, it is suggested that in the event of an emergency or a migration crisis, member-states that have to cope with them directly should be able to use flexibility in managing them. The clause must provide for the possibility of activating emergency prevention and emergency response mechanisms, as well as deviations in the modes of action where necessary.

The letter is co-signed by the other two “frontline” EU member-states in the Eastern Mediterranean, Cyprus and Bulgaria, reported state-run news agency amna.