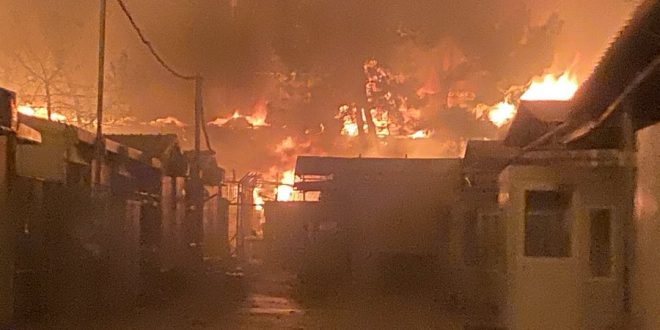 It was short before Tuesday midnight when fires broke out in several parts in- and outside the Moria camp. The powerful winds quickly spread the flames around, through containers and tents. Total destruction. 13,000 people on the streets. The island of Lesvos has declared in “state of emergency.” Authorities investigate arson. Alarm for the 35 confirmed coronavirus cases that authorities do not know their whereabouts. No reports of fatalities or injuries.

„It is the night that #Moria is burning to the ground,” says one friend. “I am standing in the flames and yet I cannot believe, what is happening in front of me.”

This video is filmed by him and sent just now. pic.twitter.com/qTEScei7SJ

The worst scenario happened – and while there was a scenario, plans to deal with it equaled to zero.

A large fire has broken out at the #Moria refugee camp on the Greek island of #Lesbos.
The camp, which was built for less than 3,000 people and is currently handling more than 13,000 is being evacuated. pic.twitter.com/Phkuymu6zl

A large part of the refugees and asylum seekers fled to the surrounding areas, while another part has moved to the city of Mytilene. However, strong police forces have been lined up in the area of Kara Tepe and do not allow them to enter the city.

This is #Moria this morning. >13.000 #refugeesgr had to flee the camp and are now on the streets. pic.twitter.com/6E3C1xYU1v

Others entered the camp in the morning apparently seeking to save some of their belongings.

Absolute destruction at #Moria camp visible with the first ray of light this morning. Approx 12,000 people will have nowhere to sleep tonight, not even the frail tents they used to call home.
Video by @moutafis77 #greece #lesvos #lesbos #migrants #refugeesgr pic.twitter.com/9XUkS1cSk2

The entire camp outside the camp including thousands of olive trees have been destroyed, also a large part inside the hotspot. 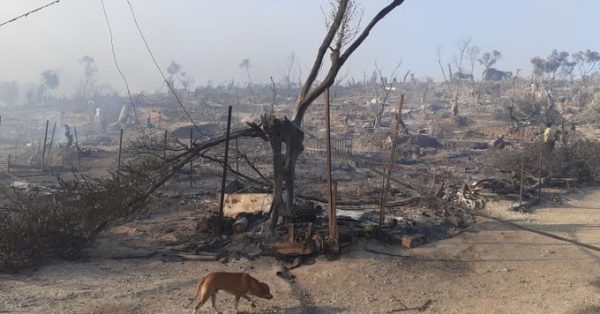 According to information the administration and identification infrastructures were not burned, but the Asylum Service and its equipment were completely burned. 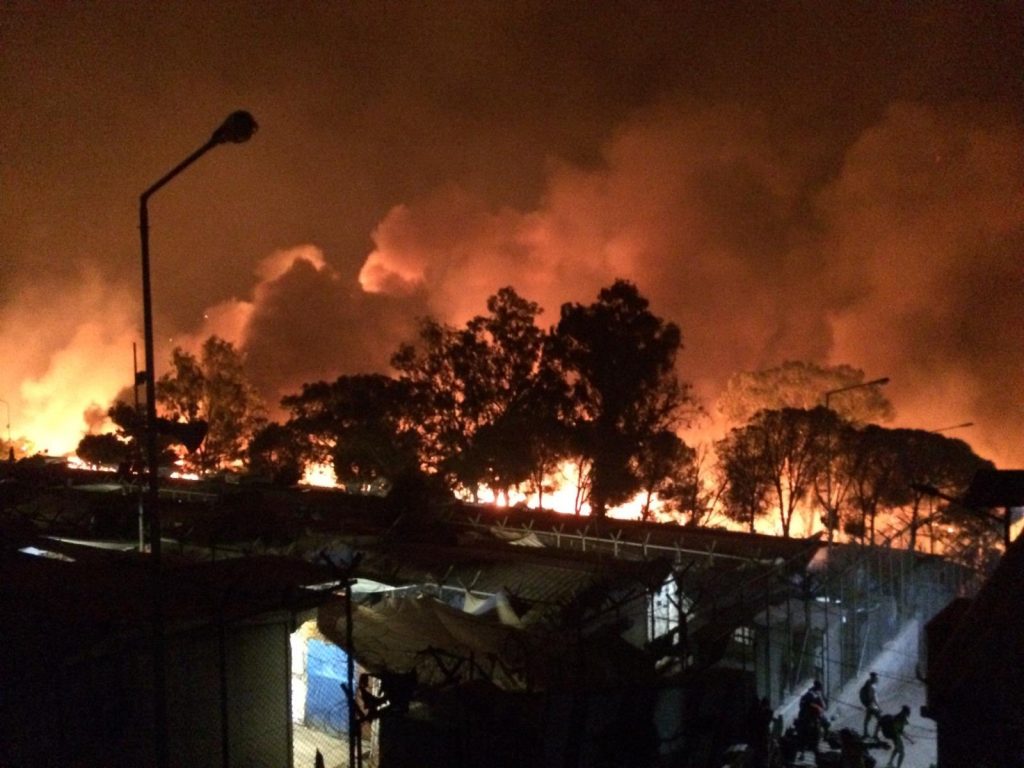 Damaged are also the area of ​​the Intensive Care Unit as wells as the new health Care unit recently donated by the Dutch Government. 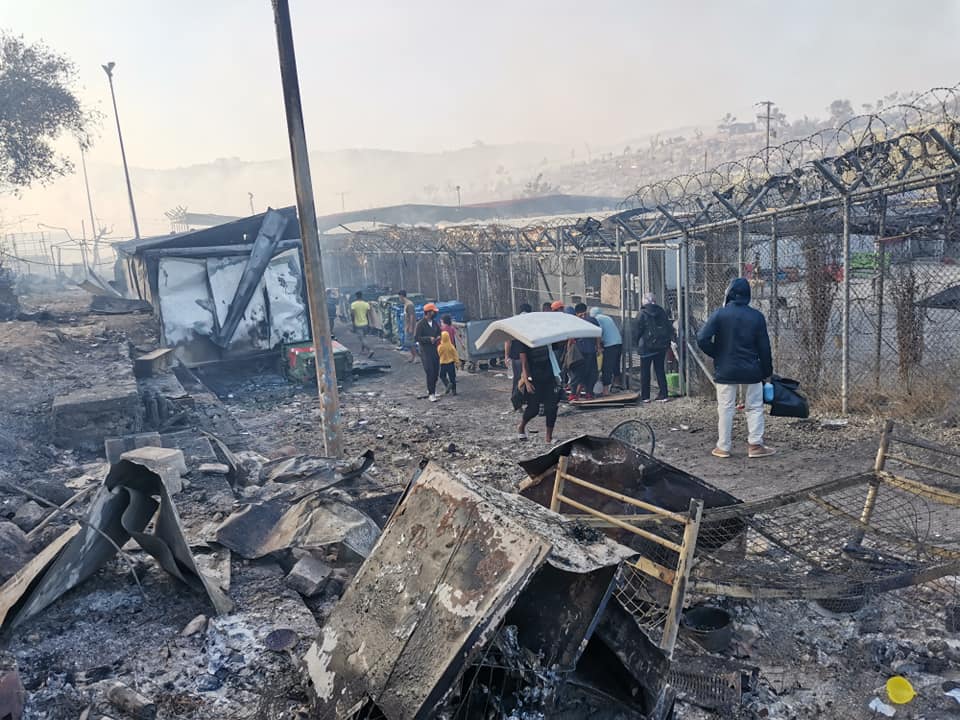 According to local media stonisi, that speaks of “uprising and fire“, clashes erupted in the camp after 35 people were confirmed positive to coronavirus on Tuesday. They, their families and their contacts refused to go in isolation in a warehouse just outside the camp. Others started to leave out of fear to contract the virus.

The clashes “soon led to fires initially around the camp that burned all the tents outside and around the KYT and containers inside,” notes the local news website.

Three squads of riot police have been reportedly deployed from Athens to Moria.

Authorities seek accommodation solutions for the thousands of people.

Residents of overcrowded Moria camp have been in lockdown for several months due to the coronavirus. 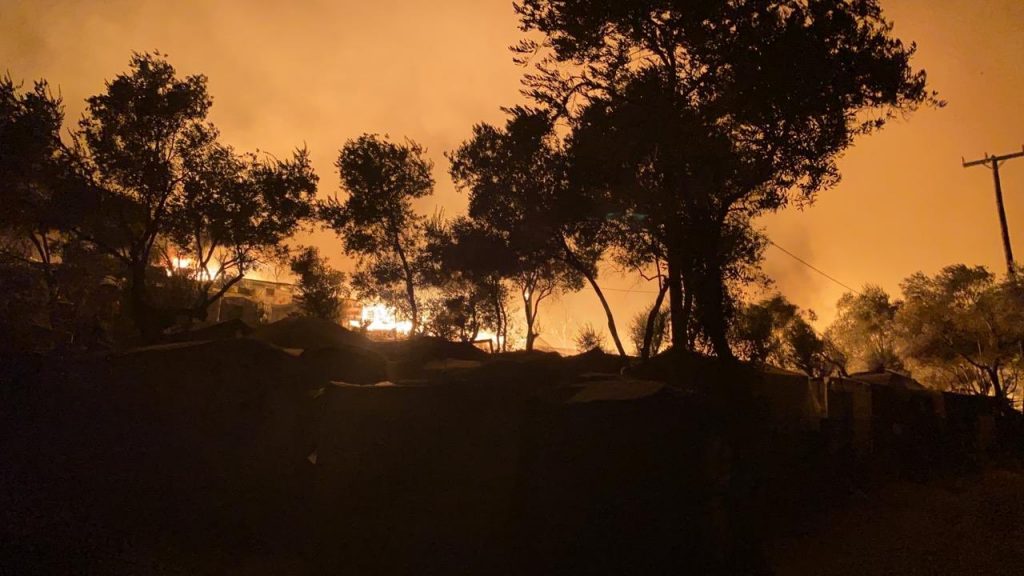 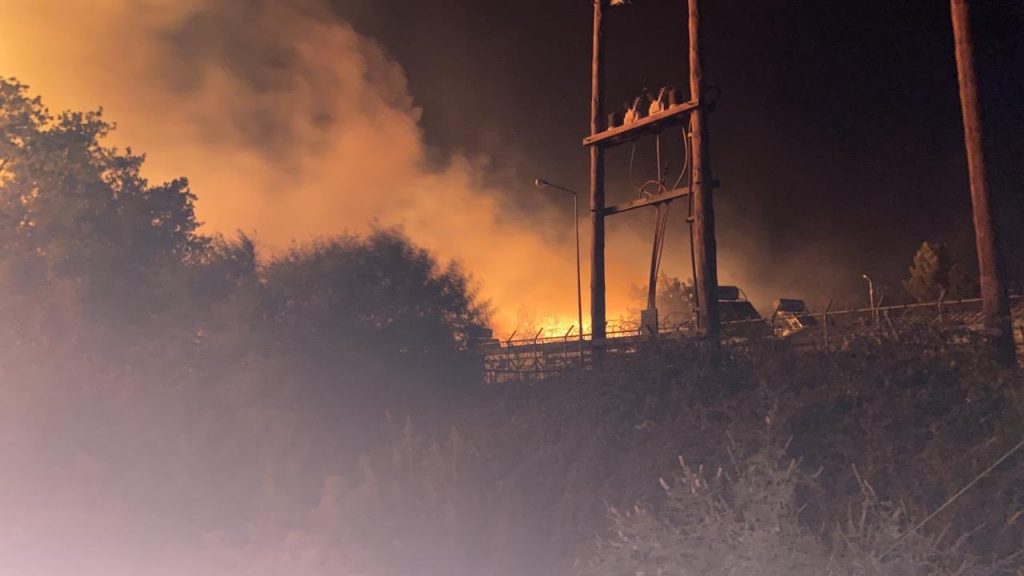 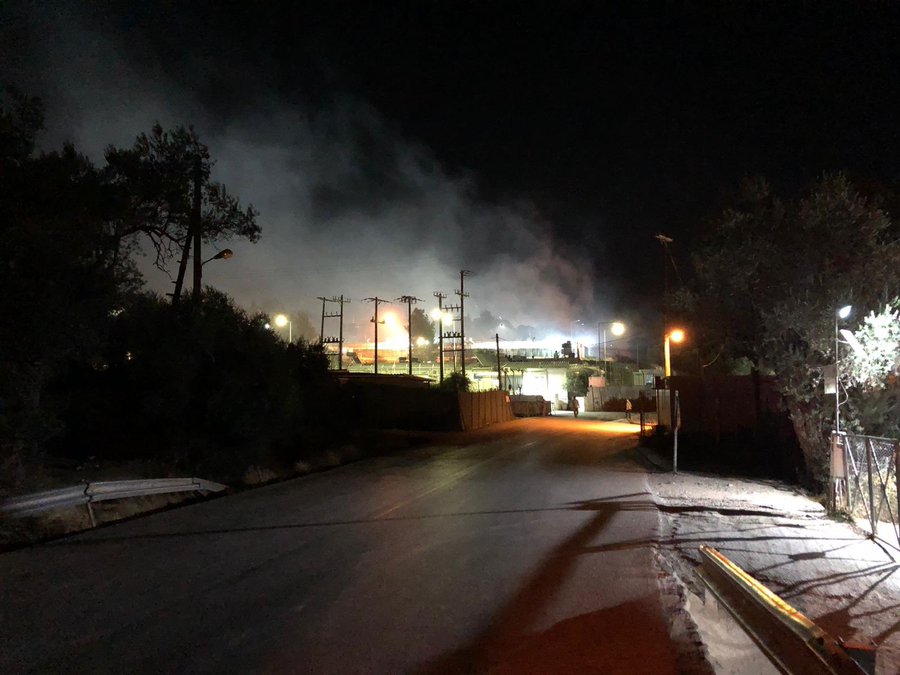 Chief of Fire Service, Konstantinos Theofilopoulos, told state broadcaster ERT on Wednesday morning, that several fires started around 10:30 at night and that they were initially hindered with thrown stones.

He added that the fire has been largely extinguished except from the containers that are still burning inside.

Citing sources of the National Intelligence Service, ERT reported that initially the tents outside the camp were set on fire.

Quick are the far-right conspiracy theorists who see in the blaze “act of asymmetric warfare” against Greece and blame “Erdogan’s soldiers” for the fire.

Prime Minister Kyriakos Mitsotakisis currently chair an emergency meeting with the ministers of Citizen Protection, Migration Policy and Asylum and Interior, the chiefs of National Intelligence and the General Staff of Armed Forces, and the head of the Civil Protection.

EU Commissioner for Home Affairs, Ylva Johansson, said that she had agreed to fund the immediate transfer and accommodation on the Greek mainland of the 400 unaccompanied migrant children and teenagers.