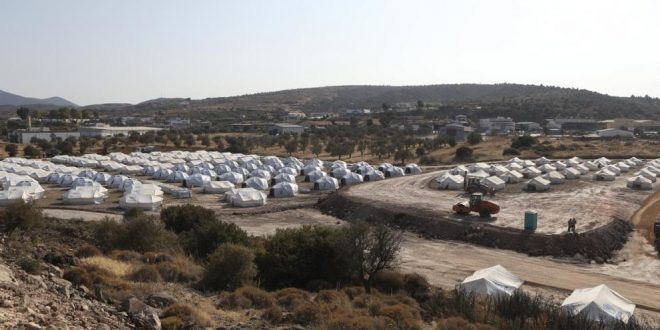 Questions arise as Greece’s Citizens Protection Minister has vowed to empty the island of Lesvos of all refugees by Easter.One main question is, of course, that if all 12,000 refugees leave in the next 6 months, why does Greece build a permanent camp on the island, expected to be in operation until 2025 and it looks as if it is  going to be “the largest in Greece” if not in the whole European Union? Where will these 12,000 people stay when they leave Lesvos? How about the refugees and asylum-seekers in overcrowded camps on other islands? At the same time, it looks as if the hastily set up temporary camp in Kara Tepe, hastily due to the Moria fires, is violating rules of constructions and other issues.

In an exclusive interview with UK’s daily The Guardian, Minister Michalis Chrysochoidis said following the fires that destroyed the overcrowded Moria camp last week, that plans would be accelerated to decongest the outpost.

Minister: Lesvos will be empty of all refugees by Easter”

“They will all leave,” Citizens protection Minister Michalis Chrysochoidis told UK’s daily the Guardian on Tuesday.  “Of the roughly 12,000 refugees here currently, I foresee 6,000 being transferred to the mainland by Christmas and the rest by Easter. The people of this island have gone through a lot. They’ve been very patient.”

About 70% of asylum seekers on the island were Afghans who would be awarded refugee status and given travel papers, he said. Recognised refugees can move to another EU member state for up to three months using the documents.

Chrysochoidis, who flew into Lesbos to help oversee relief efforts, welcomed reports that Germany was prepared to take in as many as 1,500 people from Moria.

“It’s very generous, very brave,” Chrysochoidis said of the goodwill gesture. “All over Europe, countries have their own internal political problems around this issue but I also think they [EU states] can see we are protecting the bloc’s borders, we have greatly minimised flows.”

On the problem that stranded refugees and asylum-seekers refuse to settle in the new temporary tents camp in Kara Tepe, Chrysochoidis blamed Afghan asylum-seekers and even some NGOs.

“There are groups of Afghans and I am afraid even some human rights organisations who are encouraging thousands of people not to go in,” said Chrysochoidis.

“It’s non-negotiable. They will leave the island but they have to go through this new facility and get the requisite legal documents first,” the minister stressed speaking to the Guardian.

If refugees go, why a permanent refugee camp?

Of course, in order to have 6,000 refugees relocated to the mainland by Christmas, that is in 3 months, you have to have structures to host them. Where are they? Where are the government plans for them? And where will the remaining 6,000 people go “by Easter”? Most likely, they will also found themselves on the mainland – because so far, the famous “EU solidarity” was never strong enough to take some burden from Greece’s shoulders – and neither will it be, I’m afraid.

And how about the refugees and asylum-seekers in the overcrowded camps on the islands like Samos and Chios and Kos? Will they be transferred to the new camp on the island where “the people have gone through a lot and have be very patient,” as the Minister said?

Minister Chrysochoidis and the government is general is proud to have minimized the refugees flows – even though often with questionable means such as “pushbacks” that are illegal.

So the question that arises is near: If the plan is to have all 12,000 refugees relocated away from Lesvos within the next six months, then why does Greece build a new permanent camp  –the largest in the EU! – on the island of Lesvos and thus with the assistance of the European Commission?

Will the new camp host refugees currently on the other islands and also display Greece’s readiness should an influx turn into a problem again?

President Ursula von der Leyen said on Wednesday during her speech at the European Palriament speech that “the Commission is now working on a plan, for a joint plan with the Greek authorities for a new camp in Lesvos. We can help with asylum and return procedures and significantly improve conditions for refugees.”

With two decisions on September 14, the Ministry for Migration and Asylum has secured the amount for the lease of land plots on Lesvos for the permanent camp until 2025.

According to an exclusive report by local media stonisi, the Ministry uploaded on state website for public expenditures Diavgeia, the amounts needed to be paid for the lease from September 2020 until 31. December 2025. The total price to be paid is 2.9 million euros.

According to the exclusive story, the size of the whole area, extending over several hundreds of acres and including the area of ​​the Ministry of National Defense [the firing range where the temporary camp is], shows the new refugee center will be much larger than that of Moria, the largest in Greece and in the whole European Union.”

The camp will be in direct contact with residential areas and many dozens of businesses, a few hundred meters from the village of Panagiouda, the news website notes.

Camp set up without necessary approvals

At he same time, regarding the temporary camp, the Technical Chamber of Northern Aegean region (TEE) denounces “massive arbitrariness” and violations of construction and others laws.

The Mavrovouni Firing Range (Kara Tepe) for the temporary settlement of refugees and immigrants belong to the Ministry of Defense but not the coastline and the shore lines, the TEE says among others..

In an announcement, the TEE says that the concession of the area for a camp needed approval by Environmental services, by the Marine Antiquities Authority, the Forest Service and General Staff of the Navy as well as some other departments of the state.

The TEE raises the issue of the “highest National Security” and of the “defense of the island” that is closed to the Turkish coast.