Breaking News
Home / FEATURED / Zakynthos, Kefalonia, Ithaki, 4 other regions in “state of emergency” due to IANOS 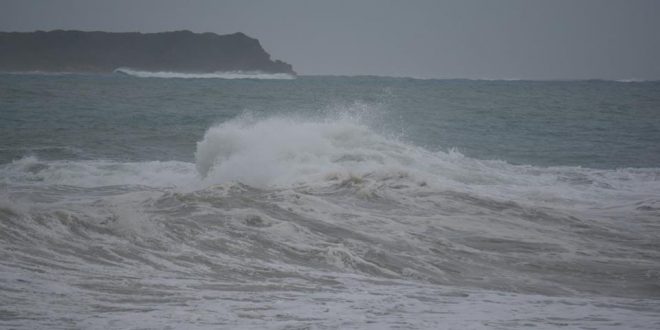 Zakynthos, Kefalonia, Ithaki, 4 other regions in “state of emergency” due to IANOS

September 17, 2020 FEATURED, weather Comments Off on Zakynthos, Kefalonia, Ithaki, 4 other regions in “state of emergency” due to IANOS 41,322 Views

The islands of Zakynthos, Kefalonia and Ithaki in the Ionian Sea and the regions on Achaia, Arkadia, Messinia in Peloponnese and Aitoloakarnania in western Greece have been declared in state of “special civil protection mobilization” Thursday noon due to Medicane Ianos.

The decision was announced by head of Civil Protections Nikos Hardalias following an emergency meeting at the CivPro operation center.

“An idea about the conditions that will prevail in the region of Attica and Corinth will be available by the evening, namely when the second wave of Ianos will arrive,” Hardalias said.

He added that the first islands to be hit by the Medicane are Zakynthos, Kefalonia and Ithaki.

The state of special civil protection mobilisation” is provided under the new law in cases of serious danger.
Hardalias said that the whole mechanism is on alert and that the situation will likely be difficult, given that it will involve a phenomenon with exceptional characteristics.

Skai TV reported short after 2 o’ clock that residents of Zakynthos, Kefalonia, Lefkada and West Greece will receive sms message via the emergency number <112> with instructions about what they should do.

Short before 3 p.m. the emergency message reached residents of Kefalonia before the Medicane. The message was in Greek and English. 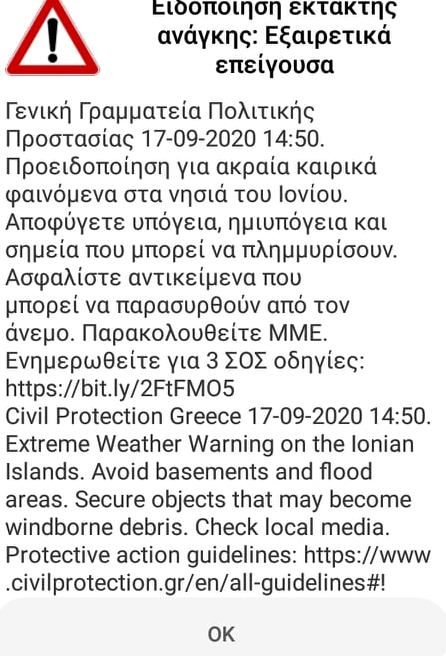 Local meteorologists reportedly warn that Ianos is expected to hit Kefalonia at 4:00 p.m. Thursday and urge people to stay at home for the next 12-14 hours..

Schools on the island of Zakynthos and in Ileia, SW Peloponnese, will remain closed on Friday, September 18, in order to avoid putting the lives of students and teachers at risk.

According to latest information the Regional Government of Western Greece decided to close all schools in western Greece, in the regions from where the Medicane will pass on Friday, September 18. 2020.

There are reportedly thoughts to close all public services as well, or even to evacuate people from areas at the coastlines, television channels reported.

Sea traffic with Zakynthos, Kefalonia and Ithaki has been suspended.

In a weather warning issued on Thursday, the National Meteorological Service said the winds in the Ionian Sea will be blowing whit intensity of 9-10 Beaufort.

Civil Protection and Fire Services are on alert.

On Zakynthos, the weather was pleasant and many locals and tourists were in the sea on Thursday morning when the weather started to deteriorate around noon.

Authorities are closely monitoring the course of Medicane IANOS – here Live! – and are holding the one emergency meeting after the other.

According to weather forecast IANOS will sweep through West and South Greece until Sunday, September 20.

Citizens are urgently advised to follow the instructions of the Civil Protection and authorities. The areas most affected are here and the forecast for the Medicane here.