Breaking News
Home / News / CORONAVIRUS / Cruiser with 1,000 on board sails to Piraeus after 12 crew tested positive 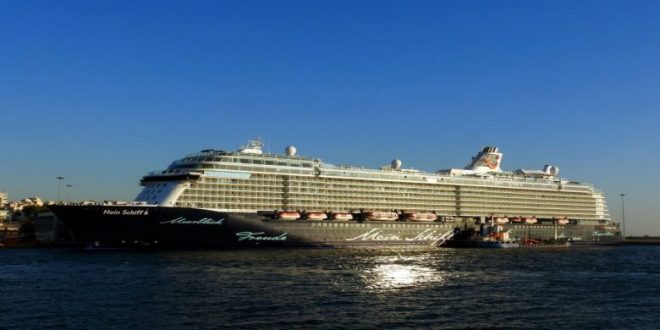 Cruiser with 1,000 on board sails to Piraeus after 12 crew tested positive

A cruise ship with 1,000 people on board set sail to the port of Piraeus at Monday noon after 12 crew members are tested positive to Covid-19. Cruiser Mein Schiff 6 had left the port of Heraklio, Crete, on Sunday night.

It was sailing off the island of Milos, western Cyclades, when the test results came out.

The Greek Shipping Ministry has confirmed that “12 crew members of cruise ship Mein Schiff 6 were found to have contracted the virus after 150 sample tests were conducted.

The crew members are reportedly asymptomatic and are isolated on the ship. Isolated are also their close contacts, local media report citing health officials.

According to initial reports, the ship was to return from Milos to the port of Heraklio, where there is a designated hospital. However, with order of the head of the National Health Care Organization EODY, ship will reportedly sail to Piraeus where testing will continue, with repeated tests to the infected and testing to the remaining members of the crew.

The passengers are reportedly Germans. They arrived with charter flight to the airport of Heraklio

Due to coronavirus measures, all passengers have to show a negative Covid-19 test before go on board.

Mein Schiff is the first ship to have resumed cruises in Greece since mid-September. The cruise takes tourists from Heraklio to Piraeus and Corfu.

The ship reportedly has a Maltese flag and belongs to a big German tour operator.