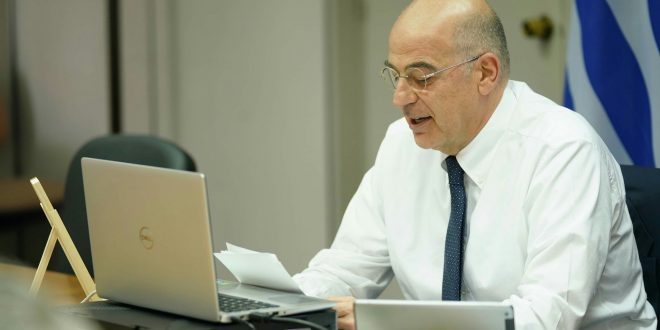 Greece has called on Germany, Italy and Spain to impose an arms embargo on Turkey, citing Ankara’s recent provocative actions.

In his letter to German counterpart, the Greek foreign minister requested that permits for the export to Turkey of certain types of military equipment, such as submarines, frigates, aircraft and armour upgrades, should not be granted, the sources clarified.

Dendias also pointed out the recent series of provocative actions by Turkey, which, as he underlined, aim to create a fait accomplis using military means.

In this context, Dendias recalled the relevant intervention of Greece’s prime minister, Kyriakos Mitsotakis, at the last European Council regarding the obligation of the EU member-states, arising from the common position that they have adopted, to suspend the export of military equipment to third countries when this equipment is used in acts of aggression or regional destabilisation, which is precisely what Turkey is doing, the same sources said, according to amna.

Earlier on Tuesday, diplomatic sources said that the Foreign Minister had sent a letter to European Commissioner for Enlargement calling for suspension of the customs union agreement with Turkey.

Main opposition left-wing SYRIZA accused the government of focusing on managing impressions and PR stunts at home rather than on a real foreign policy against Turkey.

In an press release, SYRIZA derided the request to the EU to examine a possible full suspension of the EU-Turkey customs union, saying that “this is only an impressions game for domestic purposes instead of a substantive foreign policy against Turkish aggressiveness.”

The main opposition party called on the government to insist of targeted sanctions against Turkey and to actively exercise Greece’s sovereign rights, especially to the south and east of Crete.

Harsh criticism came also from KINAL/PASOK that also accursed the Mitsotakis government of PR stunts for internal consumption, that the diplomatic actions come with delay and are improvised, especially when Turkish seismic search vessel Oruc Reis has come closer than 12 nautical miles to Kastellorizo.

PS Germany will go against its own interests and impose arms embargo to Turkey? That’s the joke of the day…