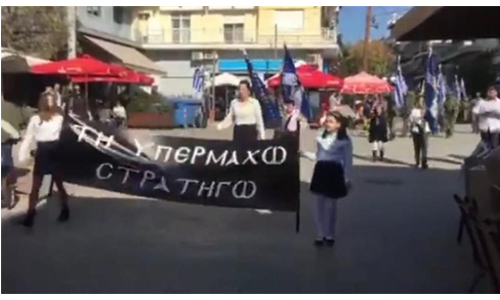 October 21, 2020 CORONAVIRUS Comments Off on People parade in Giannitsa as if no bans and no pandemic (video) 979 Views

Students, citizens and members of the Army and associations ignored the measures and bans of social gatherings due to the pandemic and staged a parade in the town of Giannitsa, the Regional Units of Pella in Central Macedonia.

Holding Greek flags and playing military marches, they marched through the pedestrian zone in the center to celebrate the anniversary of the liberation of the city. Some wore masks and some did not even bother.

The parade took place on Tuesday, October 20, despite the bans of all festive event and parades due to the 2. wave of coronavirus.

The regional unit of Pella has a big epidemiological load.

Sources from the regional government told media, that the parade in Giannitsa was a “spontaneous incident without participation of officials.”

PS a long as authorities turn a blind eye to “spontaneous incidents” they should not wonder when citizens do not comply with the measures….