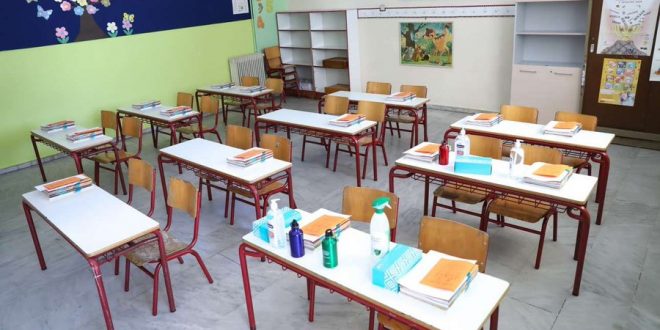 Athens Court sentences teacher for not wearing mask in classroom

November 4, 2020 CORONAVIRUS Comments Off on Athens Court sentences teacher for not wearing mask in classroom 1,724 Views

The Three-Member Criminal Court in Athens sentenced to 12-month imprisonment a teacher for not wearing a mask in the classroom violating the state rules and setting students’ and colleagues’ lives at risk.

The teacher at a vocational lyceum in Ilioupolis suburb of Athens was arrested on October 23 following complaints by a student’s mother.

The mother had claimed that the teacher expelled her son from the classroom when he asked her to wear the mask. The school principal tried to settle the issue away form the court room but without success.

The court, by a majority, found the teacher guilty of the offenses of violating the measures against the spread of the coronavirus and the disruption of the service, recognizing her the mitigation of the previous legal life.

The sentence has been suspended for three years.

Apologizing, the teacher claimed that she had informed the school principal and the students that she would often take off her mask due to an ear-infection but she would all other measures to protect against coronavirus: “I would never endanger the students and my colleagues,” she reportedly told the court.

According to the teacher, the complaint by a student’s parent that she expelled him because he asked her to wear her mask was not valid. She said that she instructed the student and other classmates to leave the room because “they were swearing and cursing.”

In court, the principal said that he had not seen if the teacher was wearing a mask or not and added that students’ councils had reported that she was not wearing a mask and that they abstained from her classes.

The public prosecutor has demanded teacher’s conviction saying that she did not respect the law and wondered if she was aware of the danger. He added that based on her testimony, she  was implementing the measures against the virus according to her liking

“The issue issue is the mask, but respecting the law,” the prosecutor stressed.