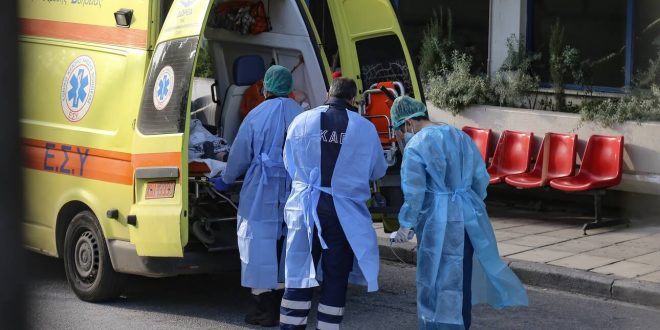 Man with disabilities found next to dead mother. Both Covid-19 positive

A 61-year-old man with heavy disabilities was found crying, hugging his 90-year-old mother in a Kavala neighborhood. The mother had died two days earlier. Both were diagnosed positive to Covid-19 and were advised to quarantine at home by the National Health Care Organization EODY.

A tragic incident in Kavala, northern Greece, revealed the drama of people with disabilities in times of the coronavirus pandemic and the lockdown in a country that little does care about people with special needs. A country that 9 months after the pandemic outbreak has done nothing for the care of such people in such circumstances..

A very old woman, a disabled man, alone at home. In quarantine. Without contact to the outer world to protect the healthy. No hospitalization for the needy in a cruel and indifferent world.

The man was diagnosed with autism since early childhood, he has heavy mental and mobility disabilities.

It was the police who broke the door into the house informed by the son-in-law  who was concerned about the lack of communication with the two. The daughter had been admitted to hospital due to serious health issues. The two were left without care.

With the help of police and an ambulance the man was transferred to the hospital on Saturday night.

The story was revealed by a doctor of the General Hospital in Kavala. “The disable man was hungry, dehydrated, scared and had high fever. He was crying all the time,” the doctor who was shaken by the drama posted on Facebook.

“His situation remain critical, he needs additional care due to his heavy disabilities,” the doctor wrote on Wendesday.

The story shocked not only the local society but who whole country. Yet no official bothered to waste a word on the tragedy.

The Greek Federation of People with Disabilities wrote on Wednesday to the Health Minister Vassilis Kikilias calling him to to immediately investigate the incident and focus on the lack of care for people with disabilities during the pandemic.

There should be immediate cooperation and coordination of the municipalities program “Help At Home”, the social services, of the social welfare institutions and the health authorities so that “no person with disabilities or lonely elderly is alone at home, without help and protections under the given circumstances,” ESAMEAgr wrote to Minister.

“In a welfare state it is not allowed that the help for an adult person with heavy disability relays solely on the family,” the Federation stressed.

“The specific incident, apart from tragic, is also a blatant violation of fundamental human rights,” ESAMEA said in its letter to the Health Minister.

So far, there is no reaction or statement by the Health Ministry to the letter sent on Wednesday.
PS today, the usual mean Greeks are outraging on social media, after the Archbishop of Athens was transferred to an Increase Care Unit at Evangelismos hospital for “preventive reasons.” the 82-year-old was tested positive to Covid-19.
Are there people in this country still believing that the Covid-19 makes no class discrimination in infection or in treatment?