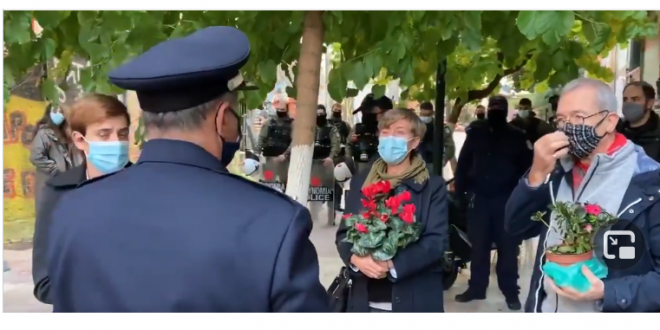 Greek police showed an strong aversion to flowers on Sunday on the 12th anniversary of the murder of teenager boy Alexis Grigoropoulos. Not only they destroyed a bouquet left at his memorial, they also detained two German nationals going to the Memorial, holding flowers.

A riot police officer was filmed on Sunday in Athens to removed a flower bouquet from the Memorial for Alexis Grigoropoulos. The man in full uniform and equipment hits the back of one of his colleagues with the bouquet and then destroys it laughing.

The flowers were left a bit earlier by a woman at the spot where the 15-year boy who was shot dead by a policeman on 6. December 2008.

The video went viral and was one of the day’s that triggered outrage. The most polite comments said that the officer showed disrespect for the dead teenager boy.”

Hours later police sources leaked to media that “disciplinary procedures were initiated against the officer.”

Apparently it wasn’t the only incident on the 12th anniversary of Grigoropoulos’ murder that showed police was caught by a mass hysteria against anyone leaving a flower or a fruit at the memorial.

The high school principal of Alexis Grigoropoulos went to the memorial to lay three pieces of pomegranates as early as 8:30 in the morning. Police stopped him and his wife from approaching the memorial although only the elderly couple and the police were around.

Citing the ban of public gatherings for more than 4 people, the police officers told Thalassis that there was an order to let no one approach the memorial. “If you do, I will detain you,” the officer warned the elderly man. Thalassis aksed him whether he wasn;t ashamed. He received no response…

Thalassis was lucky that he was not detained. Two German nationals were taken to the police station in Exarchia for bringing flowers to Alexis memorial. One of them is Maria Oshana the head of the German Rosa Luxemburg Foundation office in Athens. Her companion is a German human rights lawyers who has been living in Athens in the last three decades.

As the woman is getting in the police car, she asks “what’s the problem?” – “No problem,” the police officer responds showing her into the car. “This is not democracy!” she says.

The two Germans were set free after short time. A video showed how they negotiated with police.

Why were they arrested? Because they were walking holding flowers, were wearing their masks and had the proper lockdown exist “permissions”? No. They were arrested in an effort of authorities to show off how has the power here. For intimidation and for setting an example.

Detained are normally people whose actions hint to a criminal action. But this is only in a democracy.

PS Fact is that when a riot police officer in full equipment feels the need to beat a …flower bouquet, he certainly needs also psychotherapy consulting. Urgently!